Protection and identity distortion
The Wildcat Suit is a protective suit used by Yolanda Montez as the crime-fighting heroine, Wildcat. The suit was previously worn by Ted Grant, who died in a battle against the ISA. Yolanda was given the suit by Courtney Whitmore when the latter recruited Yolanda into the Justice Society of America.

The Wildcat suit is a full-body, multi-textured, and multi-colored catsuit with a raised v-neck collar which leaves exposed only part of the wearer's neck and throat at the front. The main tones are different shades of blue and purple. Wildcat has a gradient colored cat cowl that covers her head, sides and back of the neck, and upper half of her face. The cowl goes over her nose and past her cheekbones. The sides of the cowl extend past her jaw in points. The cowl does include two cat ears on the sides, and deep-set cat-shaped eyes. The coloring around the eyes is black. On the sides of the cowl are claw marks from the top of the cowl to the lower cheekbones. She wears dark purple, leather-textured gloves that reach to her forearms. Elongated, metal claws that reach sharp points are attached to, and retractable from, the fingernail section of the gloves. The same dark purple textured material is present in a strip that begins around her neck, down her torso, and wraps around her waist. There is an additional spiral metal texture that starts mid-way down her thigh and spirals around to her shin, where it becomes the primary texture until her ankles. The metal is also a very deep purple tone. She wears black boots that have three elongated metal claws sticking out from the tips of the boots.

The original Golden Age version of the Wildcat suit was a pure black, full-body catsuit. He wore a black cowl that covered the upper potion of his face and was shiny in appearance. The cowl went over his nose and past his cheekbones. The sides of the cowl extended past his jaw in points. The cowl does include two cat ears on the sides, and deep-set eyes. The sides of his forearms have a textured black material that is present on his sides and then again on the fronts of his thighs. He wore black boots that came to his shins. Wildcat also wore Kumpur around his knuckles and wrists that were stained with blood from his many fights, and also supported his wrists against any firm impact.

The suit initially presents itself as a baggy black catsuit that is highly unappealing. When Yolanda placed the cowl on her head, it activated something inside the suit and instantly conformed to her body. It changed in color, size, texture, aligning to her physical dimensions, and even activated the suit's abilities for Yolanda's usage. There is a two-way radio in the mask, implied to have been equipped there by Courtney as an added feature and tactical boon. This allows Wildcat to communicate with other the other JSA heroes when they aren't in close proximity.

The suit exhibits advanced technological capabilities that allow its wearer to achieve feats that are above that of an average human. Wildcat can walk across small ledges and balance herself perfectly. This is due to technology in the boots that grant her perfect agility and balance. She was able to land on her feet after jumping off a fence while performing a flip. Upon landing, energy waves exerted from the boots, absorbing the impact. She suffered no physical trauma from the fall and landed in a perfect position. The technology might have a trigger, as she was off-balance after dropping from the air vent in the hospital.

On command, the suit releases long claws from the fingers and thumbs of hands. These claws prove to be extremely resilient and strong, able to cut through almost anything. The claws allow Wildcat to scale buildings and slash through-hardened substances. When the claws have served their purpose, they retract back into the suit as fast as they appeared. There is also a level of advanced grip in the gloves, as Wildcat was able to both adhere upon and climbed up a vertical surface and even perched herself upside-down unto a ceiling, and was able to hang from there without falling or creating noise.

The suit also absorbs shock when Wildcat falls great distances, which allows her to be unharmed when a long fall would otherwise be deadly or result in serious injuries. This is evident when she jumps off The American Dream building, the tallest in Blue Valley, and lands on her feet, with her suit absorbing the shock from the landing and allowing both her and Stargirl to remain unharmed. The purple waves of shock flowed from her knees to her boots, and a purple wave of energy rippled out from the suit when she landed. Conversely, the suit might unleash said shock to "cushion" Wildcat's descent, with the only catch being the impact must be made using the soles of her boots, hence why whoever donning the suit must always land on their feet; but in exchange, this means that the costumed Yolanda can also exhibit phenomenal kicking or stomping power, in addition to her razor-sharp claws, in battle.

Boxing champion Ted Grant wore the suit for many years while fronting as the superhero Wildcat. He wore it for all of his significant battles against the ISA and other foes. He was commonly photographed wearing it. 10-years-ago during the JSA's battle against the ISA, Ted was fatally wounded and died in the suit. Pat Dugan presumably took the suit and kept it and other Wildcat related artifacts in the JSA's headquarters.

When Courtney Whitmore decided to remake the JSA and recruit new members, she mentioned recruiting a new Wildcat. That night, stole several artifacts from the JSA's headquarters. Wildcat's cowl was amongst those items.[1] Courtney eventually found Yolanda Montez, an outcast at Blue Valley high who was skilled in boxing and martial arts. She was able to convince Yolanda to come to the Whitmore house where she showed her the cosmic staff and Stargirl suit. She remarked that she had a suit for Yolanda as well, and gifted her the Wildcat suit. The suit was baggy and black but upon wearing it and then placing the cowl on her head, it suddenly conformed to her body, tightly hugging every curve and contour of Yolanda's mid-adolescent feminine physique, and altered to purple undertones. Yolanda navigated perfectly in the suit and was almost a natural in its use, finding incredible perks with the suit such as claws, agility, and stealth. She scaled a brick wall using only her suit and landed with silence in Blue Valley Medical Center. Yolanda eventually accepted Courtney's offer to pick up the moniker of Wildcat and join the modern-day Justice Society of America.[2]

Yolanda decided to leave the JSA when her mental heath was put in jeopardy after the death of Brainwave. She told Courtney she would never put the costume on again.[3] She kept to this promise and dropped the suit off on the front step of the Whitmore-Dugan House, concealed in a duffle bag. Courtney was heartbroken to find the cowl and suit inside the bag. She brought it inside and placed the suit back in Pat's box of belongings in the basement.[4]

Additional Season 1 appearances include being pictured in "S.T.R.I.P.E.". 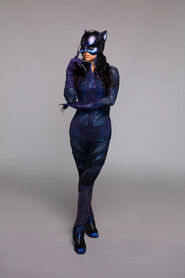 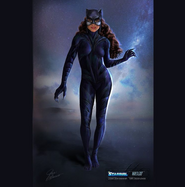 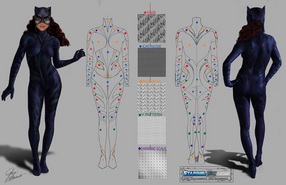 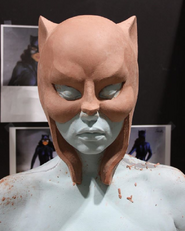 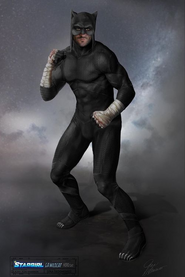 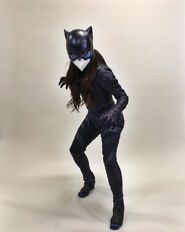