Stargirl Wiki
Register
Don't have an account?
Sign In
Advertisement
in: Characters, Superhero, Member of the Justice Society, Objects
English

Thunderbolt is a character in The CW and DC Universe series, Stargirl.

He is a magical, electrical, fun-loving, wish-granting pink imp. The wishes he grants often cause more trouble than the wish-asker would ever expect. But despite his somewhat constant supernatural disasters, the Thunderbolt's heart is always in the right place, even if it is wounded by the friends he has lost throughout his long existence.

He was previously thought to be a powerful weapon used by a member of the Justice Society of America used to fight crime. It appears to be an ordinary pink pen; however, it contains a powerful electrical charge.

Thunderbolt is from the homeland of Bahdnesia, a location that is no longer on the map. He found his way to the equally lonely Johnny Thunder and they teamed up to become the crime-fighting duo, "Johnny Thunder and the Thunderbolt". They joined the infamous superhero group the Justice Society of America, and fought foes with the team. However, due to the unpredictable nature of Thunderbolt and his literal interpretation of wishes, the pair were often sidelined during great battles. They were initially benched on the December 24th battle against the Injustice Society of America, but were called into action by Wildcat. Sadly, Johnny Thunder was killed during the battle but made a final wish that Thunderbolt would find a new friend. Thunderbolt went inactive for eleven years as his pink pen sat at the JSA's headquarters.

When Pat Dugan brought Courtney Whitmore the Justice Society of America Headquarters she discovered the Thunderbolt among the artifacts that the JSA left behind. Courtney became inspired to use the artifacts to reform the society but Pat warned her against using the pen because he felt it was the most dangerous weapon in the collection. Later when Courtney returned to the JSA headquarters to steal the artifacts she attempted to take the pen but it produced an electrical charge when she tried to grab it which caused it to make a laughing noise at her. She grimaced but placed it in her bag in spite of this.[1]

She later tried to use the Thunderbolt by clicking the pen but nothing happened. She repeated this action several times before giving up, thinking that it is just a useless object. But when she leaves the room, a laughing sound emits from the pen.[2]

Thunderbolt later choose Mike Dugan as his new friend and owner after realizing he was alone. Thunderbolt later put a password on Mike's newspapers for him to summon him. When trying to grant some wishes Mike wants, he misunderstands them and causes disaster. When the new JSA offered some of their wishes, Pat was against it as he stated that Thunderbolt was "not exactly a monkey's paw but he is close." Pat later orders Mike to summon Thunderbolt to speak to him privately. When summoned, he becomes fun-loving and tells Pat what Johnny's final wish was. Thunderbolt later assists the JSA in finding Richard Swift by zapping where Richard Swift was hiding on a map of Blue Valley. He tried to attack Richard Swift, but was restrained and forced back into his pen, incapacitating Mike. He is last seen with Jakeem Williams in pen form after Mike wished for him to be "in better hands".[3]

Thunderbolt's time with Jakeem is vastly different then his time with Mike. Jakeem doesn't have a guiding hand and begins to misuse the power to make wishes. His wishes are grand and catch attention, such as turning an entire house into candy, planting gigantic candy canes on the sides of the street, and pink lightning being seen across the skies of Blue Valley.[4] When Mike does find Jakeem, it is after discovering a giant burger on someone's lawn. He confronts Jakeem over having the Thunderbolt, and demands to know where he is. Jakeem explains that he wished for Chinese food and Thunderbolt flew off. He's been gone for a couple hours and Mike realizes that Thunderbolt probably flew to China to get the food. As Mike explains the JSA and the true power of the Thunderbolt, Jakeem reveals that he doesn't want to get rid of the Thunderbolt as they're friends. Mike agrees to let Jakeem keep the Thunderbolt, but that means he has to help them save the world from Eclipso.[5]

Thunderbolt later reappeared in the finale episode after his run to get Chinese food for Jakeem much to Zeek's surprise. He granted the wish for the part needed for the S.T.R.I.P.E. armor to be fixed. Afterwards, he joined the ongoing battle against Eclipso, with Jakeem requesting for him to electrocute the villain. As Thunderbolt flew through Eclipso in order to attack him via his electric body, he was caught by the villain and thrown into the S.T.R.I.P.E. armor housing Mike Dugan, crashing it and temporarily incapacitating him. Thunderbolt later joined Jennie-Lynn Hayden, Courtney, and Sylvester Pemberton in defeating Eclipso by turning Eclipso into a piece of burnt toast.

Thunderbolt is a fun-loving, electrical, and magical creature whose good intentions aren't always conveyed well. He is very literal and can only grant wishes at their face value. He is charismatic, boisterous, and exaggerated in his movements. He lives to have fun and has fun to live. He is eager to teach his ways to any new friend. He is attracted to like-minded individuals and can only be activated by those who feel as he does - absolutely, completely, alone. He is sarcastic, witty, and doesn't hold back his insults or underhanded remarks. 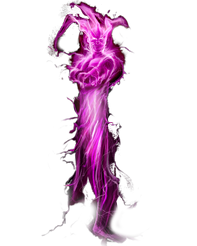