"THE POWERS THAT BE -- Courtney makes a difficult decision after Pat confronts her about the potential consequences of recruiting new members to the JSA. Elsewhere, Barbara shows up in support of Mike's science fair, and Courtney, Yolanda, Beth and Rick prepare for their first major mission."

During a football practice session, quarterback Artemis Crock completes a successful touchdown before getting tackled down and gets taunted with sexist remarks from a teammate. Angered as he walks away, she punches him to the ground to the delight of her parents, but she ultimately gets benched by the coach. Later that night, as the coach tries to get into his car, he's menacingly greeted by Larry and Paula. He tries to explain Artemis needs to control her temper, of which Crock and Brooks are proud of. Coach admits he may be new but he's seen controlling parents like them before, and threatens to bench her for the rest of the season. Crock doesn't take too kindly to it and bashes his bat against his head.

Stargirl flies back to her house and sneaks through the window, but she's surprised by Pat. The Cosmic Staff goes to hide under her bed, and Pat confronts her about the stolen JSA paraphernalia. Courtney says she thought they were in this together but Pat's disappointed. Courtney once again says they need help and a new JSA needs to be formed. Pat deduces that she started doing such that, and asks if she gave the missing hourglass to Rick Harris, given he has a truck in his garage with his fist print on them. She confesses that he's Rick Tyler, confirming Pat's suspicions even though he didn't know Rex Tyler had a son. Courtney confesses that Rex and his wife was murdered by Solomon Grundy. Pat asks how she knows, and she answers that Dr Mid-Nite, through his goggles showed her and her friend Beth Chapel. Pat asks who else she recruited, and Courtney says Yolanda Montez is the only other one, the new Wildcat. Pat comments it's serious now, and reprimands Courtney for putting more kids in danger. He angrily tells her he'll deal with Rick and demands she get the goggles and Wildcat's costume back. She tries to protest but Pat asks if she wants them to end up like Joey Zarick. He says she doesn't give him much respect but thought she was better than this. He picks up the remaining JSA items and leaves, but accidentally leaves the unassuming Thunderbolt pen behind. In the basement, Pat looks though Rex's old diary solemnly.

At the Mahkent resident, Jordan wakes in the night and strokes his wife's empty space, before getting a text from Anaya Bowin. Getting dressed, he tries to discreetly leave but is caught by Cameron. His son asks if he's ok, and understands that today will be a hard one. Jordan tells him to go back to sleep.

In the woods, Larry and Paula bicker as they bury the coach's dead body, and are confronted by an irritated Jordan. He tells the pair it's the third coach in two seasons they've eliminated, and Anya's getting tried at replacing coaches. Larry says he's only doing what's best for his daughter. Jordan reiterates that Project: New America will ensure her a safe future, but Larry's tired of waiting and wants to get back in the game already, and Paula's sick of the small town living. Jordan announces that they should get their costumes out - they're back in action tonight, much to their glee.

Mike is finishing building a candy volcano for the science fair today, albeit last minute. Barbara is impressed, and asks when it starts. She says she can reschedule a meeting she has at 2 but Mike doesn't want to be the nerd whose visited by his parents. Courtney walks in and tries to make eye contact with Pat, who ignores her. Pat later catches Rick walking to school, saying he knows his real father and that they need to talk. At school, Yolanda shows Courtney a video of Ted Grant, explaining how after false accusations against him, he bounced back in his wresting career. If he can do it, so can she. Yolanda thanks Courtney for choosing her, with the latter not bringing herself to ask for the Wildcat suit back. In the library, Beth is happily conversing with Chuck's AI, bonding over a book. She sees Courtney, and greets her as Stargirl. She warns Beth about using code names in public. Beth thanks her for the toggle, remarking that it's finally the first time someone has listened to her, and feels she's gained a new best friend. Once more, Courtney can't make herself get it back.

At Pat's garage, he accuses Rick of indenting the trunk, to which he replies his uncle is a jerk. Pat tells him his father would never do such a thing, but he's dead and so it doesn't matter. Rick's angry that Pat knows who killed his parents and hasn't done anything. Pat's been trying, and enlists Rick's help as he hands him his father's journal.

Courtney arrives in the cafeteria and is happily greeted by Beth and Yolanda. She nervously states they need to talk. They think Courtney's will take them on their first mission, and proudly announce they're ready for anything. 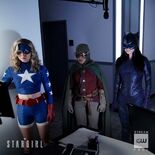 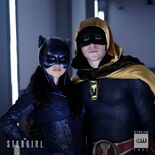 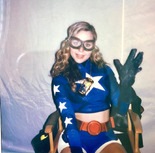 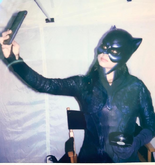 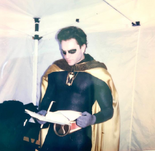 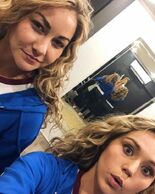 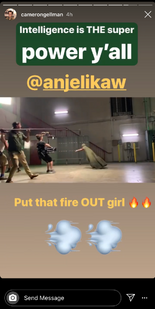 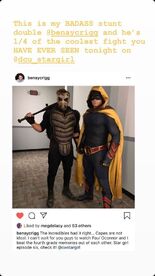 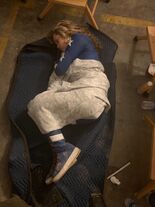 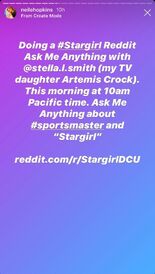 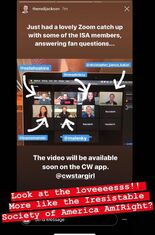 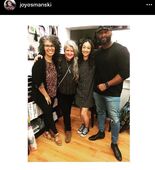 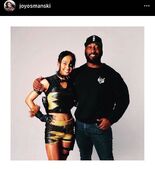 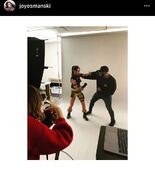 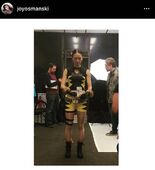 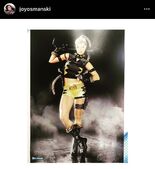