Ted Grant is a character in the CW and DC Universe series Stargirl.

Ted was the former heavyweight champion and was known as Wildcat. A founding member of the Justice Society of America, Wildcat may get knocked down, but he always stood back up. A champ through and through, Wildcat was as good a trainer as he was a fighter.[1]

Ted fought crime along the upper Eastern Seaboard; until his death at the hands of the Injustice Society of America.

Ted Grant became the heavyweight boxing champion at some point in his life. On one occasion, he was accused of fixing a fight and stripped of his title, which nearly defamed him until he made a comeback in his match against Castillo.

Over a decade ago, Ted Grant was a member of the Justice Society of America and operated under the moniker "Wildcat". He used an unparalleled ability in boxing and hand-to-hand combat which led to greater acceptance and recognition. This also brought the costumed hero to the attention of super-villains keen to end this new threat. Most notable among Wildcat's costumed foes was super-villainess, The Tigress, who fought Wildcat on many occasions. These exchanges were inconclusive, however, each time ending with the Tigress' escape, although on some occasions this escape took the form of her apparently perishing as a means of eluding Wildcat and the police.[2]

He perished along with the rest of his team on Christmas Eve of 2010 during a battle against the Injustice Society of America. At the time of his "disappearance", there was no conclusive proof of Wildcat's real identity. Stripesy was present for Wildcat's final moments after he was blasted out of the JSA's headquarters.

Ted Grant appears in flashbacks where he was fighting the Injustice League. He was thrown out of a window once he was defeated. He was also mentioned by Pat where his suit is held. Yolanda found out Ted's history and began looking up to him.

Ted appeared in the flashbacks where he paid his respects after hearing Charles McNider's daughter, Rebecca was killed by Eclipso. He voted "yes" to kill Bruce Gordan to defeat Eclipso as he had a son and Eclipso threatened his family. He later appeared as an illusion to fight Yolanda stating that she "didn't deserve his mantle as she didn't have the stomach to do what was necessary".

Ted always stood back up after he got knocked down. He believed in the concept of good luck, as gave Stripesy his Big Boy keychain to symbolize it, and he also believed there was nothing more important than children, as he supported Starman's decision to sideline Stripesy so he could look out for his son. Grant's belief in the importance of family is what led him to vote in favor of killing Eclipso's host after the former threatened the JSA's loved ones, as he was looking out for his son and was willing to do what was necessary to protect him. This darker side of his personality was also demonstrated when he dismissed Stripesy as merely the JSA's mechanic and Starman's chauffeur, going as far to say he should not have a say in the matter of killing Eclipso's host despite Flash's objections. According to Courtney Whitmore, Ted was the one who killed Gordon to stop Eclipso and was forced to live the rest of his life with the guilt of his actions.

Ted was a burly, athletic man with a strong upper body. He was Caucasian with short brown hair light facial hair. His muscular physique was emphasized by his black form-fitting suit. While fighting crime, his knuckles were wrapped to keep his bones aligned to prevent injury, compress soft tissue to make his fists more rigid, and pad his knuckles.

Ted Grant's suit augmented his natural athletic prowess. Although there is some speculation as to the full extent of Wildcat's powers, his traits in battle strongly indicate that he displayed additional abilities. 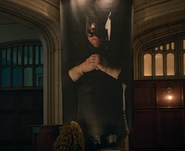