"Summer School: Chapter One" is the first episode of the second season of Stargirl, and the fourteenth episode overall. This episode aired on August 10, 2021, on The CW.

SCHOOL'S OUT - With summer break around the corner, Pat suggests the family take a vacation after seeing that Courtney has been spending too much time focused on being Stargirl and not enough time on her schoolwork. Meanwhile, as Beth attempts to reconnect with Chuck, she stumbles upon a major secret her parents have been keeping from her. Elsewhere, Yolanda continues to be haunted by Brainwave's death, and Rick secretly tracks Solomon Grundy after suspecting he may still be in the area.

Decades ago in Melody Hills, Indiana, a birthday party was held for a little girl named Susie. Across the street, a young girl named Rebecca begs her mother to let her attend the party. Her mother refuses as Rebecca had made a scene at the store over not getting a doll. The refusal upsets Susie who runs outside to pout on the porch. A young boy appears in her yard and introduces himself as Bruce. He asks her to the party but she can’t as her mom won’t let her. Bruce doesn’t see her mom anywhere and lures her out against her better judgment. She nearly runs into the street of excitement, and barely avoids a truck. She stands outside Susie’s house and longingly watches the happiness. She notices a pile of presents and Bruce appears behind her. He encourages Rebecca to take one of the presents; she didn’t get anything today and no one is looking anyway. Rebecca runs up, steals a package, and hides behind the bushes to open it. When she does, the doll inside is deformed and dirty. Its eyes glow red. She drops it in shock and it turns back into a doll. Bruce‘s face turns black and his eyes red. He raises a black diamond and shames her for stealing the doll. They are engulfed in purple light. Rebecca’s mother goes looking for her daughter and thinks she is hiding at the party against her wishes. When she goes across the street, she sees something in the yard that makes her scream. The name on the family’s mailbox is McNider.

In the present day, our heroine Stargirl glides around town on her Cosmic Staff and lands in an alley, pointing her weapon at a potential foe lurking in the shadows. Unfortunately, the threat turns out to be an annoyed raccoon. Nonetheless, she signals the coast is clear to her teammates. Hourman sarcastically asks if she checked inside the trash cans. Undeterred, Stargirl asks Dr. Mid-Nite to scan the area. The latter bemoans how less fun it is without Chuck as her goggles malfunction but otherwise detect no suspicious activity, such as the presence of Cindy Burman, The Gambler or Solomon Grundy. Hourman states he beat Grundy, the Gambler is a wimp, and Cindy was probably crushed when the disk cave in. Stargirl presses on others could be at large but Hourman rejects it: Icicle was shattered in a million pieces, Dragon King is dead, Tigress and Sportsmaster are locked up. The Injustice Society of America is done and gone. Wildcat suggests they call it a night and leave, an idea supported by Dr. Mid-Nite and Hourman. Stargirl insists they're the Justice Society of America and they can't quit. Wildcat says they are still the JSA, and if something happens they'll suit up and get to action but otherwise, they're protecting a small town that doesn't need it. Stargirl suggests cutting their patrol nights from seven to six as a comprise. Unamused, her teammates leaves. Stargirl calls after them that she can handle the last of their patrol checks tonight. Sighing, she at least tells the Cosmic Staff it won't leave her.

At the Whitmore-Dugan residence, Courtney is pondering over sheets of ISA documents when her stepfather Pat Dugan appears. He tells her it's 4 in the morning and asks if she's been out all night.

Yolanda is still haunted by Brainwave's death because she did it to avenge Henry but she realizes that she killed someone in cold blood. Courtney tries to help her.

At Blue Valley High, Courtney and Yolanda see Beth and take news of her since Icicle kills "Chuck". Soon after Artemis speaks two boys saying that her parents are in prison, when she stops in front of Courtney, she believes that Artemis attack her and attack in first. She is convoked in Principal's office. Pat and Barbara arrive, Courtney explains that with Artemis it was a misunderstanding. The principal states that Courtney failed English and History, so she has to attend Summer school.

Later, in the evening, Courtney hears a noise in the home and finds someone stealing Green Lantern's power battery. They fight and her adversary reveals herself as Jennie, Green Lantern's daughter. Pat, Barbara and Mike arrive and ask what is happening. Courtney says that is another misunderstanding.

Meanwhile, the same night, Cindy returns to BVHS. She retrieves a folder entitled Injustice Unlimited. She takes refuge in Dragon King’s underground tunnels. She opens the folder of potential candidates and tears a photo of Henry King Jr. in half, as his death made him useless. She lays out images of the ISA’s children, including Artemis Crock, Isaac Bowin, and Cameron Mahkent. She also lays down a photo of JSA protégé Mike Dugan. She holds up the black diamond Eclipso and states they have some recruiting to do. Then, they laugh. 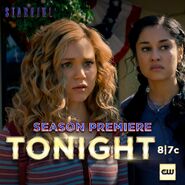 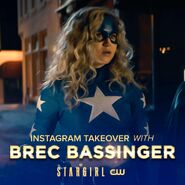 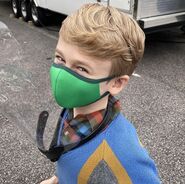 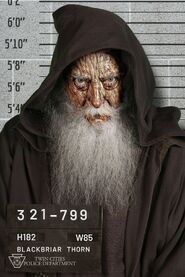 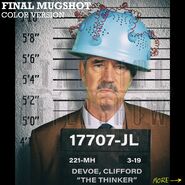 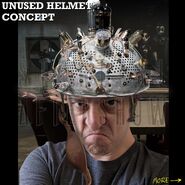 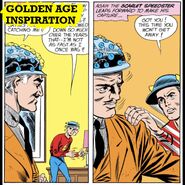