Summer School: Chapter Nine is the ninth episode of the second season of Stargirl, and the twenty-second episode overall. This episode aired on October 5, 2021, on The CW.

JOHN WESLEY SHIPP GUEST STARS AS JAY GARRICK - As Eclipso takes aim at the Whitmore/Dugan's, Pat is reminded of painful memories from his past involving the original JSA and their fight to take down Eclipso. Meanwhile, Mike is forced to confront the guilt he feels for his role in Icicle's death, and Barbara comes face to face with someone from her past. Finally, Courtney struggles to hold onto hope after Eclipso targets those around her.

At his manor, Bruce Gordon drinks and wishes he had never brought the black diamond back from the island. He says that the black diamond ruined his family and friends, and Eclipso in the diamond tells Bruce that those were his own choices. Bruce throws his glass down to shatter it on the floor and yells at Eclipso to leave him alone, and Eclipso says that if Bruce wanted the demon to leave him alone, Bruce should put the diamond down. Eclipso figures that Bruce can't let go of the power, and Bruce takes a revolver out of his drawer and contemplates it.

Eclipso tells Bruce that he's there for Bruce, and he let Mona go. He can get her back, and her husband is the only thing that stands between Bruce and Mona. Once the husband is gone, Mona will be Bruce's forever. Bruce says that he won't kill the husband, and Eclipso says that if Bruce let him take control of his power, he'll take control of Bruce's body and kill the man. Eclipso tells Bruce to drop the gun, and when he does energy shoots out of the diamond and transforms Bruce into Eclipso.

At American Dream, Barbara is informed that everyone is going home because of the coming storm. Barbara looks out the window at the storm clouds.

At the Whitmore house, Pat and Mike are getting supplies before they go down to shelter in the storm. As Pat sends Mike upstairs to get sleeping bags, Courtney comes in and tells her stepfather that Rick's hearing was canceled. Pat says that they'll see what they can do for Rick once the storm clears, but Courtney says that the storm won't pass and Eclipso is responsible. The girl says that Eclipso is getting stronger, and she and Beth will go after her. Pat insists that they're not prepares, and Courtney points out that they've never been prepared enough for Pat's satisfaction.

Pat looks at a yellow rose in a vase on the counter, and remembers the past.

Mourners gather at the funeral of Rebecca McNider, including the JSA members. Once the service is over, the JSA members discuss how to stop Eclipso, who killed Rebecca. Jay Garrick, the Flash, arrives and says that they'll stop the demon. Jay says that Eclipso comes from an island was brought back by explorer Bruce Gordon.

McNider and his wife Myra argue about how McNider wasn't there to save Rebecca from Eclipso, and she walks off. McNider goes after her and hugs her.

Pat pricks his finger on the rose, and hears a child giggling. He turns and sees a coffin in the dining room, and approaches it. The lid opens and he hears a child singing that someone is a liar. The coffin disappears, but the voice continues taunting Pat as a liar.

Mike goes to the door of Courtney's room. She's on the phone with Beth, discussing how they can fight Eclipso, and doesn't see Mike. The air turns cold, and Mike goes downstairs to find Pat. There's no sign of Past, and the temperature keeps dropping. Mike puts on a jacket and looks around for Pat, who is in the basement. Pat looks through a box filled with mementos of the past, including a petal of a flower from Rebecca's funeral.

After the funeral, Sylvester tells Pat that they'll find Bruce and discover what he knows. Pat asks his friend to let him help even though he isn't on the team, and Sylvester says that they can't let another child die. Shade appears and Sylvester figures Shade isn't there for a fight, tells Pat to go back to the garage, and walks off with Shade. They disappear behind a tree, and Pat runs over and confirms that they're gone.

Barbara is driving home and her engine stops while she's on a back road. The storm comes up and rain pours down. Pat goes through the JSA files and looks through the old photographs of him and Starman.

Back at the garage, Pat works on the Racer. Sylvester comes in and says that Shade called what they're facing a spiritual parasite, and somehow Bruce found it and it possessed him. It can make its victims' nightmares come true, and Shade told Sylvester how to stop it. Sylvester saw fear in Shade's eyes when he said he faced the demon before, and called it real evil. According to Shade, the only way to kill it is to kill its host. Pat is shocked at the idea of killing another human, and Sylvester explains that when the host dies, Eclipso will be forced into the diamond and lose its power.

Pat reminds Sylvester that the J.S.A.'s code and Sylvester's is that they have to save the host. Sylvester agrees and says that there's always a way.

A figure appears in the shadow behind Pat, but he doesn't see it.

Mike checks the thermometers and finds that it's showing the proper temperature. There's a knock at the door and Mike answers it. Cameron is there and Mike invites him in. The older teenager says that he was caught in the storm and didn't know where else to go, and asks where Courtney and Barbara are.

Barbara discovers that the car doors are jammed, and the engine still won't start. She can't get a signal on her phone, and Jordan appears in the backseat and says that they have a lot to catch up on as the area around the car ices up.

Mike starts a fire in the fireplace, and Cameron stays with Mike and talks about how he lost his parents. Cameron doesn't seem to notice the cold, and says that Barbara's loss won't be as hard as Mike as when his real mother abandoned him. Mike wonders who told him about his biological mother, and Cameron says that the same person who told him that also told him that Mike killed Jordan. When Mike wonders what's going on, Cameron says that Jordan is with Barbara and he's with Mike. With that, Cameron blows out the fire with his icy breath.

Barbara insists that Jordan is dead and isn't there, and figures Eclipso is responsible. Jordan says that the storm is his doing and signifies his rebirth, and he would he protected her but she hurt him so now he's going to hurt her.

Mike calls to Courtney and Pat, but gets no answer. Cameron says that no one is coming to help Mike, freezes Buddy when the dog runs at him, and tells Mike that everyone in the house is going to die. Mike swings a poker at Cameron, who grabs it and freezes it. The younger teenager drops it in pain and runs.

Cameron chokes Mike with a collar of ice, and says that he's going to kill Mike's father since Mike killed his. He tells Mike that he's nothing, not wanted by the HAS like he wasn't wanted by his mother. Courtney comes in with the Staff, and shines its light on Mike. He snaps out of his hallucination and realizes that Cameron isn't there and Buddy is fine. Courtney goes to find Pat.

In the basement, Pat hears something in the shadows. He turns and looks around, then turns back to the box of mementos. He takes out Starman's costume and finds blood on his hands, and goes to clean it off in a sink, while Bruce watches him from the shadows.

Courtney tries to get to Pat in the basement, but discovers that the door is jammed.

Flash, Hourman, Wildcat, and Starman enter the garage where Pat is working and Flash says that they need an odd number of members because none of their most powerful members were able to stop Eclipso, who is threatening their families Wildcat says that they have to kill the host and take a vote. When Pat objects, Wildcat tells Pat that he's not a member of the team and Flash cuts him off. Wildcat votes to kill, and Flash votes not to. Hourman votes yes, and Flash asks for Pat's vote. Pat votes against, and figures Starman will vote against as well. Starman votes in favor of killing, and says that Eclipso threatened his family and he'll protect them. He tells Pat to get the Racer ready, but Pat refuses.

Bruce speaks up and tells Pat that the blood will never come off, and his children's blood is next. He shoots at Pat, who dodges and falls to the floor. Starman, the original Hourman and Wildcat emerge from the shadow, and Bruce tells Pat that he had a choice and made it, and they have irrevocably damned them very being in doing so.

Courtney arrives and uses the Staff's light to free Pat from Eclipso's hallucination. That night, Mike holds Buddy and promises the dog that no one is going to hurt it. In the basement, Pat says that he's okay thanks to Courtney. Courtney asks what he saw, and Pat says that he saw Bruce. She wonders what he hasn't told her, and he says that he never told her how the JSA really stopped Eclipso.

Pat drives the Racer to Bruce's manor, and braces himself to go in. Starman gets into the Racer with Pat, and tells Pat that Pat was right and the JSA should never take a life... but it's too late. Pat sees the blood on Pat's costume, and Starman briefly looks at the black diamond in its case and then tells Pat to drive back to JSA HQ.

Pat says that all of the JSA members drifted away after that, and no one came back until the ISA reformed. Even then, they were broken and that's why the ISA won in the end. When the JSA killed Bruce, it wound up killing them. Courtney is hurt that Pat has been lying to her while Eclipso has been hurting and destroying her friends, and wonders what Barbara is going to say when she finds out. Pat tells Courtney that Barbara knows, and Courtney runs upstairs without a word.

Barbara returns home and Courtney confronts her and Pat, asking why they lied to her. Eclipso watches through the outside window, giggling at the further dissension he has brought on the newer, younger generation of the JSA. 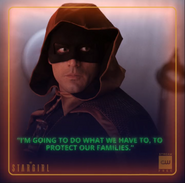 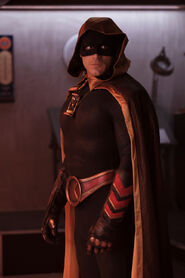 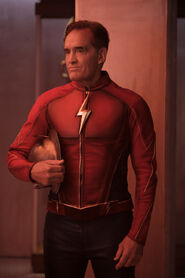 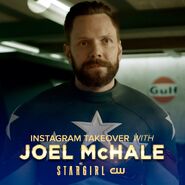 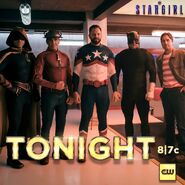 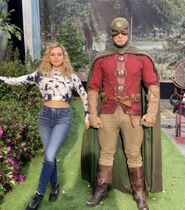 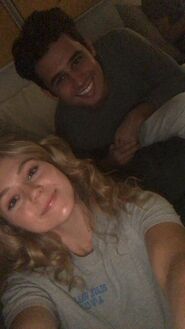 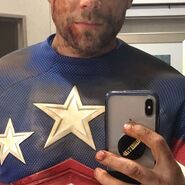 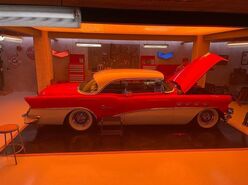 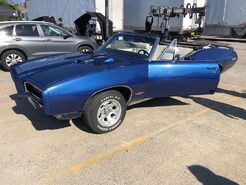 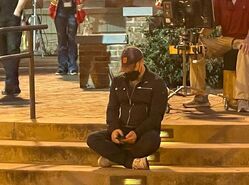