"Summer School: Chapter Four" is the fourth episode of the second season of Stargirl, and the seventeenth episode overall. This episode aired on August 31, 2021, on The CW.

THE DEVIL IN THE SHADOWS - As Pat considers whether he should come clean to Courtney about Eclipso’s past, a surprise visit from Crock and Paula catches him and Barbara off guard. A tense run-in with The Shade provides Courtney with some valuable information. Finally, Cindy makes her move.

In prison, Artemis meets separately with her parents Paula and Lawrence, who are imprisoned. They assure Artemis that she'll be good in her upcoming tryouts. She isn't sure, and her father tells her that she's the best in the state. She tells each of her parents that the other loves them. The guard comes in to take Artemis out.

At the Chapel house, Beth tries to reach Chuck and determine why they're in danger from Eclipso. As the AI searches the house, Bridget comes in and Beth hastily hides the goggles. Beth tells Bridget that she just missed James, and suggests they go on a mini-golf date like they used to. Bridget says that they're both very busy and suggests Beth and her friends go, and leaves.

Pat explains that Eclipso can influence others, and drive them to do evil. The more active Eclipso is, the more powerful he becomes. Courtney wonders what Shade plans to do when he teams up with Eclipso, and Pat admits that he doesn't know. When Barbara looks nervous, Courtney promises her mother that she won't rush in and they'll research Eclipso first.

In the ISA tunnels, Cindy says that she didn't want her stepmother dead, and talks to the diamond. Eclipso says that it isn't about her mother. An image of Bobbie appears and asks Cindy if Cindy is going to hurt her. Cindy says that she's sorry for killing Bobbie, and tells eclipse to the make the image go away. He does, and says that he wanted to show Cindy that she had to put the past before her. When Cindy threatens to destroy the diamond, Eclipso says that he only desires what Cindy desires. An image of the ISA that Cindy is preparing to form appears on top of the portrait of the original ISA.

A newspaper boy finds his papers, including one with a headline of Paula and "Crusher" breaking out of prison. The couple confront the boy and Paula tells him not to try running because he can't. Crusher agrees and chuckles.

Rick gets another perfect score on the retest, and he tells Miss Woods that he studied. Woods apologizes for doubting Rick, and Rick says that everyone does and it's okay, before walking out.

Pat is driving through Blue Valley, goes to Pit Stop, and goes in, calling to Mike. He discovers that the lock on the backroom is broken, goes in, and finds Crusher holding Mike hostage. Paula joins them and explains that they left a decoy trail to misdirect the cops to Florida.

Paula and Lawrence say that Artemis has tryouts, and if Pat helps the couple lay low, they'll go back to prison without incident once they see Artemis perform on the field. Crusher threatens to tell everyone about STRIPE if Pat doesn't cooperate, and Pat agrees.

Pat takes the Crocks to his house, and tells Barbara what's going on. She points out that the Crocks tried to kill her, and Pat says that they should cooperate to keep things "moving forward". Barbara goes to the kitchen, and Crusher tells Pat that Pat is letting himself go. He tells Pat to start training Mike now, while Paula goes into the kitchen. She and Barbara look nervously at each other, and Paula notices the blast marks from Jade and Courtney fighting. Barbara says that they're remodeling.

Crusher talks about life in prison, and Pat asks if he keeps up with the ISA. The criminal says that the rest of them are putzes, and he and Paula never fit in. Pat asks about Shade, and Crusher says that he hasn't seen him in years and Shade made fun of him. Crusher starts bonding with Pat, who plays along.

Paula criticizes Barbara letting her children eating processed foods, and they compare notes about how their daughters don't listen. They find out that they have a lot in common, and Paula agrees to have some of Barbara's coffee.

Yolanda is working as a waitress at the diner, as Courtney, Rick, and Beth eat. When Yolanda joins them, they go over what they've learned about the black diamond. It comes from Devil's Island, but isn't on any present-day maps. It was taken off the maps in 1830s because nobody ever came back. There were two tribes on the island, and one tribe trapped a demon in the black diamond. An explorer, Bruce Gordon, discovered the island. Bruce was a famous explorer in his day, and found both tribes dead. There's nothing about Bruce or Eclipso online.

Cindy takes Isaac to the ISA conference room, and says that the JSA killed their parents. Isaac's father, Fiddler, is in the painting. Cindy takes out Fiddler's violin, and tells Isaac that he'll learn to play it.

At the used book store, Courtney asks the owner if he has any books on Brue Gordon. he directs her to the explorer section, and Richard is there and says that he knows who she is. She says that she knows he plans to team up with Eclipso and the new JS will stop him. Richard says that he doesn't plan to conspire with Eclipso, and denies having killed Dr. Mid-Nite. He tells her that he's wicked but not evil, and the only people he's killed are those who deserve it. Richard tells Courtney that Eclipso killed Dr. Mid-Nite's 10-year-old daughter, and says that he plans to throw the diamond in the deepest part of the ocean so Eclipso can't hurt anyone again.

Courtney asks Richard why he would do that, and he says that as an immortal he's bored. He tells Courtney to leave it all to him, and disappears into the shadows.

Courtney returns home and asks Barbara where Pat is.

Pat and the Crocks go to the stadium, and they sit down and watch the tryouts. Paula tells Pat that Barbara is lovely, and Artemis is quarterback. She gets tackled, and the Crocks complain about the ref. They call to Artemis and she sees them and smiles, then makes a play that results in a touchdown on a 40-yard pass. The Crocks cheer and hug each other.

A smiling Cindy enters the stadium and watches Artemis. She takes out the diamond, sees Courtney, and Eclipso tells Cindy that Artemis will be Cindy's to use.

Courtney sees the Crocks. Eclipso possesses Artemis, and makes Artemis see police moving in on her parents. She attacks one officer, beating him to the ground and yelling that her parents did nothing wrong. The other players pull Artemis away, and Eclipso's spell ends and Artemis realizes that she attacked Courtney and there were no police. Chuckling, Cindy leaves.

After the tryouts end, Paula and Lawrence talk to their daughter. They tell her that they're not innocent, and didn't want to ruin her dreams by telling her they were criminals. Artemis says that she did good because they were there, and her parents tell her that they're not going to get in the way of her future and it has to be goodbye. The family hugs, while Pat and Courtney look on and Courtney wonders why she feels bad for them. She says that she wouldn't have rushed in and fought, and asks Pat if he knew Eclipso killed Dr. Mid-Nite's daughter.

Pat says that he didn't want to scare Courtney, and Courtney says that she's not scared. She asks if Pat knows anything else about Eclipso or Bruce, and he says that he doesn't and follows the Crocks back to prison.

Artemis gets a call from the principal saying that with her temper, she can't represent the school. Cindy approaches Artemis and says that she has another team Artemis can join: one that the Crocks were part of.

That night, Barbara asks Pat if he told Courtney everything. He says that he didn't and wonders if he should, and Barbara says that now that Artemis knows her parents were criminals, she'll never be the same. Pat warns that if they tell Courtney about Eclipso and the JSA, she'll and the others will never be the same. They agree to protect Courtney from the truth, and hug.

Stargirl prepares to go out and asks Shade what's going on, despite the Staff trying to pull her back.

In her bedroom, Beth tries to hack the confidential file. Chuck contacts her and asks who she is, but the AI doesn't remember her. Chuck asks where Pat is, and says that he's Charles McNider and has been trapped in the shadows for years. The goggles lose the signal, and Beth figures that Dr. Mid-Nite is alive.

In the Shadowlands, Dr. Mid-Nite tries to contact Beth. 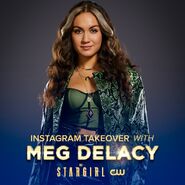 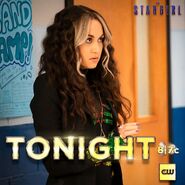 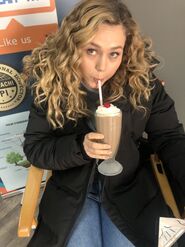 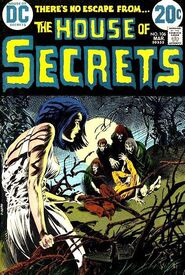 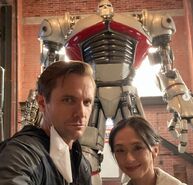 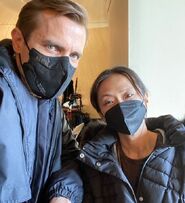 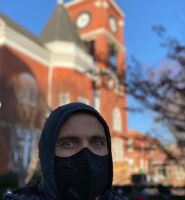 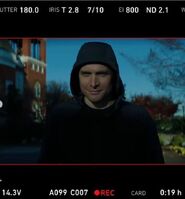 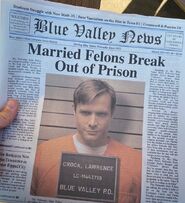 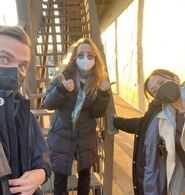 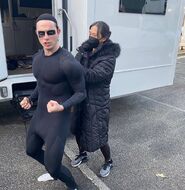 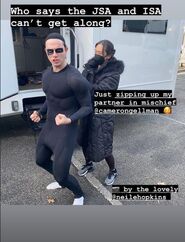