"Summer School: Chapter Five" is the fifth episode of the second season of Stargirl, and the eighteenth episode overall. This episode aired on September 7, 2021, on The CW.

STORMY WEATHER OVER BLUE VALLEY - As Pat and Courtney clash over their next steps in their search for Eclipso, ominous weather conditions in Blue Valley hint that he may be near. Meanwhile, Cindy's plan to recruit another student takes an unexpected turn, and Cameron opens up to Courtney.

A girl in her bed screams for her mother. Her mother runs in to the girl, Cindy, and Cindy says she saw her father and he wants to change her. The older woman assures Cindy that her father is far away and he won't find them. Once Cindy's mother leaves, Cindy goes back to sleep and someone steps out of the shadows. Waking up and seeing it, Cindy screams.

That night, Stargirl returns home and goes into her bedroom. Pat is waiting for her and points out that it's past curfew, and he asks where she was. Courtney admits that she was out looking for Shade, and Pat wonders why. She tells her stepfather about meeting Shade earlier at the bookstore, and he was the one who told her about Dr. Mid-Nite's daughter. Courtney points out that Shade was more honest with her than Pat was, and she went to propose that she and Shade team-up to find Eclipso.

Pat says that Eclipso brings out darkness in the weather as well as people, and notes that the recent weather in Nebraska has been sunny except in Blue Valley. He figures that they have to play it out, and not ask Shade for help. Pat reminds Courtney that Shade has killed people and he's not on their side. As Pat goes, Courtney says that she'll stick to the curfew and Pat apologizes for not telling her about Dr. Mid-Nite's daughter. She wonders if Pat is holding anything else back, and Pat claims that there isn't and leaves

The next day as storm clouds gather above Blue Valley, and Cameron is looking on the mural. A wind comes up, and Cameron prepares to paint his father's face onto the mural. As the storm clouds move in, Cameron goes to school and runs into Paul Deisinger. Cameron says that he's going to use the studio because it looks like it's going to rain. He drops his notebook, and Paul picks it up and notices that Cameron has made several sketches of his muse. Paul says that maybe Cameron has found his muse.

Courtney and Yolanda come up, and Courtney nervously says that they should talk about the weather. Paul tells Cameron that his art can say what he can't, and he should show Courtney his sketches.

Cindy is in the studio, and when Cameron comes in. He asks what she's doing there, and she says that she'd like to see some of his work. Cindy offers her condolences about Jordan's death, and Cameron tells her not to say that she's sorry about his father because she's never been sorry about anything.

Cindy extends a shiv from her sleeve behind her back and prepares to kill Cameron. Paul comes in and gives Cameron his sketchbook back, and Cindy brushes past him. Eclipso possesses Paul and tells him that he's his new muse.

Richard says that she should never speak of the diamond again, and the JSA are too young to face the horror within. He starts to warn her, and Barbara asks why he cares. Richard says that he doesn't, and if Courtney learns where the diamond is she should relay its location to Richard through her. Barbara points out that his card has no contact number, and she opens her drawer to get it and finds a number burned into it. When she turns, she discovers that Richard is gone.

Rick is taking more food to the forest, and remembers when his parents were killed by Grundy. He drives into town and sees Cameron working on the mural, and revs his engine to get Cameron's attention. Cameron asks if Rick needs something, and Rick says that he doesn't, looks once more at the mural, and drives off.

At the Pit stop, Pat meets with Beth and says that they should use the goggle so track the weather. Rick comes in and Beth tells him that she heard Charles McNider through the goggle. She figures that McNider is alive somewhere and they should find him. Pat warns that Eclipso can create hallucinations, but Rick wonders if Beth is right. Pat says that they won't rest until they find McNider, but until Beth hears from him again they need to focus on the weather.

At school, Paul is in his class and coughs. He clears his throat and goes back to teaching history. He describes Helen as a historical muse, and starts coughing again. The teacher finally suggests that they end early, then runs into the studio and coughs up paint. The lights flicker and Pauls' eyes glow with the diamond's power.

Pat drives to Zeek's auto junkyard, and Barbara insists on going with him. She reminds Pat that the Thunderbolt said that Mike is lonely, and they find Mike and Zeek checking out a junker. Pat asks Mike what he's doing, and Mike says that he might buy a car, as a getaway car for the team. After asking Zeek to step aside, Pat tells Mike that they'll work to him buying a car and he understands his frustration. Mike is upset, and Pat suggests that they work on a JSA project and start small. Smiling, Mike hugs Pat and thanks him as Barbara looks on, smiling.

Courtney and Yolanda are walking home, and Yolanda says that her headaches are better and thinks she's been focused on Eclipso. They come to Cameron and the mural, and Courtney tells Yolanda to go on. Once Yolanda leaves, Courtney goes over to Cameron and admires his work. They talk about Jordan, and Cameron says that he wants to show Courtney something weird. He takes out his sketchbook and shows her his sketches of her, and Courtney looks at it and smiles.

At the school, Paul looks at a blank canvas and coughs. Eclipso tells him that Paul has been blessed, and Paul's artistry deserves to be seen again. The demon asks what he sees, and Paul sees an image in his mind and find sit beautiful. Eclipso tells Paul to show the world, and Paul grabs black paint and goes to work.

Cameron takes Courtney to his studio at his house, and says that he doesn't plan on leaving Blue Valley until he graduates. When she says that depriving the world of his talent could be selfish, they look at each other and start to kiss. Courtney's phone dings and she checks the weather pattern that Beth has sent her. She says that she has to go and Cameron reminds her that she's run out on him before. Courtney says that it's the last time and leaves. Cameron sees his grandmother Lily in another window, watching them, and she closes the shutters.

That night when the JSA assembles, Dr. Mid-Nite tracks the epicenter of the weather to the school's football field. She tells the others, and Stargirl explains that Pat is with Mike so he couldn't be with them. Stargirl spots Paul's car parked next to the field, and goes into the school to see if the teacher is in trouble. They go through the hallways, and Dr. Mid-Nite picks up an electrical disturbance ahead.

The JSA see a flickering light coming from the studio, and go inside. Paint is scattered everywhere, but there's no sign of Paul. The black diamond is drawn on the wall, and there are other canvases with the diamond painted on them.

Wildcat finds a painting with Brainwave's face on it, and it "talks" to her by name. She clutches at her head briefly, and then a face protrudes out from the diamond wall painting. The others run for the door but discover that it's sealed. As darkness spreads from the painting, Hourman punches the door open. Lockers fly open and Eclipso taunts the JSA with their worst fear. Wildcat sees the people she killed, Hourman is confront images of himself and Grundy, and Dr. Mid-Nite sees pictures of her parents

Stargirl deflects the locker doors flying at them, and blasts the darkness as it crawls across the ceiling. She hears Paul yelling, and follows his vice to wear he's in the hallway covered in the darkness, saying that he sees it all. Stargirl asks him if he has the diamond, and Paul says that he's blinded by the darkness and it's all he can see. Stargirl uses her staff to fire a beam of light, and tells Paul to grab it. He touches the Staff and the darkness retreats.

The JSAers snap out of their hallucinations, and wonder what happened. They find Stargirl and Paul lying on the floor, and Paul mutters that he's lost his muse.

The team go to the Pit Stop, and Pat tells them that Paul is undergoing psychiatric evaluation. They figure that Eclipso was working through Paul, and Pat warns that Eclipso's power is growing and he's reaching out past the black diamond.

The next morning, Beth is at home when her parents return. She is looking at a photo of her family, and tells her parents that she found divorce papers and asks what is going on. They say that it's a mutual decision but they haven't decided to go through with it yet, but it doesn't change that they love her. Bridget says that she has to go to work, but they'll talk more that night. James and Bridget awkwardly hug Beth, then leave.

In the ISA base, Cindy tells Isaac and Artemis that Cameron isn't worth the trouble and it's just the three of them. She says that the diamond is all the help they need, and it's power that she controls. Cindy tells them that they need to get Mike, and laughs.

Cameron is working on the mural, then clutches at his hand in pain. He drops his brush and it frosts over.

DC's Stargirl - Hunter Sansone - In The Dark - The CW 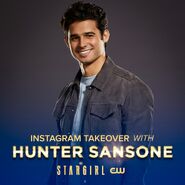 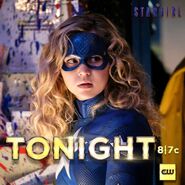 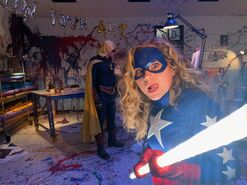 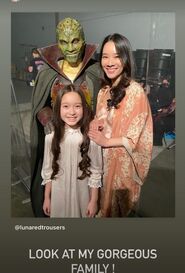 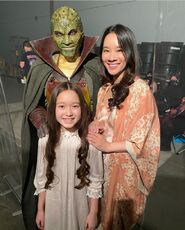 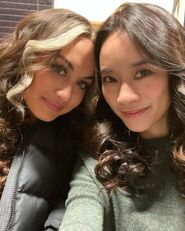 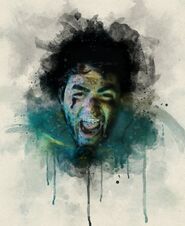 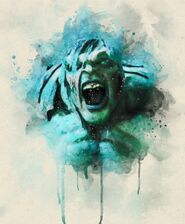 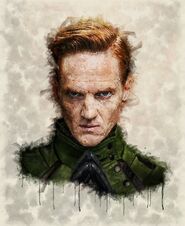