CFO of The American Dream

Steven "Steve" Sharpe is a character in The CW and DC Universe series, Stargirl.

Steven is the cool fronted yet confident supervillain known as The Gambler. He was a member of the Injustice Society of America as they worked towards Project New America. Through this mission, Steven was placed in the CFO position at The American Dream in Blue Valley, Nebraska. He had an off-putting reputation among his employees as he deeply hated everyone's suggestions.

When Project: New America came to a head he went to toe-to-toe with Dr. Mid-Nite. During this exchange, she decided to distract him by draining all of his assets and leaving him completely broke. When the ISA's mission failed, Steven deleted his computer's file systems and disappeared into the night with his cat.

Steven is the costumed supervillain, The Gambler. He was the arch-nemesis of Golden Age JSA member, Dr. Mid-Nite, and they frequently battled due to their mutual technological skills. On Christmas Eve 2010, The Gambler fought alongside the Injustice Society of America in a battle against the JSA in California. After the battle, Steve relocated to Blue Valley alongside Jordan Mahkent and other ISA members. He became the CFO of The American Dream and has helped build Blue Valley into the town it is today.

Ten years ago, on Christmas Eve, a top-hat wearing costumed villain fought alongside his fellow group members against their heroic costumed foes. This man, known as The Gambler, attempts to attack Starman but is easily and swiftly knocked aside by the Cosmic Staff. In the present day, a woman is giving Barbara Whitmore a tour of The American Dream and points out their CFO, Steve Sharpe. Steve is speaking with Blue Valley councilman, William Zarick, opposite the balcony.[1]

At The American Dream, the CFO, Mr. Sharpe, is conducting an open session on their next philanthropic event, but no one has anything to add except Barbara. She starts that Blue Valley has more restaurants than ever before and presents a community test. Sharpe shoots it down fast, looking around for more ideas. Barbara raises her hand again, this time calling for a farmer's volunteer program but the idea is dismissed by Sharpe as silly. He smirks saying he'll come up with one and dismisses the meeting. As everyone is heading out, Barbara is assured by a coworker that Sharpe tends to be tough.

That night, after Henry King Sr. was rendered comatose, Steve goes to the ISA's secret headquarters under The American Dream. He is met by Jordan Mahkent, who is the leader of the ISA. arriving at the main ISA headquarters table, meeting Steve Sharpe. Steve shows Jordan the footage of the new bespectacled hero who defeated Brainwave, remarking on their resemblance to their former foe, Starman. Steve asks what they should do, prompting Jordan to say that killed one Starman, and will kill another. Steve watches as Jordan's breath condenses, and the screen before them begins to freeze over.[2]

The next day, at The American Dream, Jordan introduces himself as the CEO with Steve standing to his right. Steve claps enthusiastically when Jordan introduces himself. Jordan restates his promise to a past loved one about making America a safer place for their children. A child of immigrants, he's traveled across the country and seen people in need in forgotten communities. He's met with applause, and Steve adds that they'll continue the revitalization of downtown. As he points out addresses, Barbara makes a noise that catches Jordan's attention. He spurs her to speak, and Barbara, stepping forward, tells him it used to be a community theater where residents would put on plays. Steve informs her it's been operating at a loss for years. Dejected, she turns away, but Jordan tells her it's a good idea. Steve protests but Jordan tells Steve to make it happen. Steve is displeased by this turn of events.[3]

In the days that followed, Steve arranges for a truck to come to Blue Valley with a satellite that he needs for unknown means. Steve waits in a movie theater with popcorn when a man arrives. The man gives Steve the schedule, route, and blueprints for the truck and satellite. Steve thanks him, but the man asks for his money. He complies and comments it should help with those pesky alimony checks. He tosses him an imported chocolate coin from France as a tip. The man leaves and Steve chuckles as he goes and smiles wickedly, continuing to eat popcorn.

Days later, outside of Blue Valley, a truck is making its way across the road but is stopped by a BVHS bus blocking the road. The truckers stop and exit the truck to investigate, and are met by a woman playing the violin. In a motel room, the body of the delivery man from earlier is revealed, a bitten chocolate coin on the table. The woman with the truckers reveals herself as Principal Bowin, who enchants one of the men with her violin. His partner asks what he's doing as the music escalates several pitches. Steve appears, telling him his will is stronger than his friend. He remarks it's too bad for the trucker. Seconds later, a derringer pistol appears from under his suit sleeve as he shoots the trucker dead.[4]

The next school day, Beth's goggles alert her that someone is trying to hack into Empire Enterprise, a communications company. Chuck identifies the hacker as The Gambler, a member of the Injustice Society, and his arch-nemesis. He remarks that Gambler is still using the same predictable coding and remarks on his lack of imagination, but explains that Gambler is wanted for murder, fraud, and forgery in several countries. The JSA decides to go after Gambler, as he seems like the easiest target out of the ISA. While the conversation is being had, Gambler is inside Empire Enterprises surrounded by several computer monitors that each have something different on them.

As he works on the complex coding that is the Empire Enterprises system, he begins humming and chair-dancing to Timber by Ke$ha. He is interrupted by the sound of commotion outside the door and stops the music to stand behind the door, drawing his pistol as he waits. When he burst into the hallway, he sees a cat, Juniper on a drink cart knocking over glasses and bottles. Steve comments on the cat being mischievous and then pets him, before returning to his work. He tells Tigress and Sportsmaster that he is almost finished with the coding but just needs a few more minutes. They buy him time by attacking the JSA that have broken into the building.

That night, Steve is present at an Injustice Society of America meeting in their headquarters. He tells Jordan that he was successful in obtaining the information they needed.[5]

The next morning, Pat builds a training exercise for the JSA, which includes homemade figurines of each ISA member. Gambler's figurine is present, wearing a pink top-hat and a makeshift white goatee paired with a white scarf.

Across town, Steven attends an ISA meeting at their headquarters. He is annoyed by Larry Crock's play-by-play of the events that happened last night. He tells Jordan that the night wasn't a complete waste, as he managed to get what they needed. He is quiet as the ISA tries to agree on a plan of action for the new JSA.

At The Pit Stop, Pat explains The Gambler's past to the JSA, pointing his figurine out to the teens. He warns them not to overlook The Gambler because of his robust form and Southern charm. He's one of the world's most dangerous killers and an expert hacker. As he explains Gambler's past, flashbacks of Gambler hacking the night before at Empire Enterprises are seen. Courtney chimes in that they know who he is, as they met him the night before.[6]

Steve is present at another ISA meeting and, like his teammates, seems uncomfortable with Dr. Ito's presence. This could be why he remains quiet during Dr. Ito's explanation of Project New America. He seems rather unimpressed with the doctor's presentation. Steven merely lounges in his chair as he waits for the meeting to end. Despite his unimpressed expression, he is also attentive to the meeting and logistics. Jordan mentions that Steven will be able to hack into the satellite to activate it, which will allow Brainwave to start the mental reprogramming process.[7] In the days that followed, Jordan's suspicions of Barbara escalate as he learns that Stargirl is her daughter, and he decides to snoop on her work computer. He calls Steven for help in logging into her computer and restoring her deleted browser history.[8]

Steve is an off-putting man who doesn't enjoy it when others express their opinions, even though they rather have a reasonable point in the matter. He is quick to shoot down ideas that aren't his own (or Icicle's, whom he sees to be on equal footing as him) and has a very ego-centric yet cut-off personality. He also seems to have a dark sense of humor, casually handing a poisoned chocolate coin as a "bonus" to an associate with a smile on his face. According to Dr. Mid-Nite's Goggles AI, the Gambler has inadequate imagination making his personal programming style easily recognizable by those familiar with it.

He is also very Greedy, as Chuck considers the money the thing that Sharpe loves most, during the final confrontation between the ISA and JSA, losing his money was the perfect distraction to lose his focus on helping Brainwave in accomplish the Project New America. Despite his evil personality, The Gambler has a soft spot for cats, as shown whenever he is hacking and a kitten is seen being petted by him.

Steve is an average-sized, middle-aged man, with grey hair and a white beard and mustache. Typically, he's seen in a variety of outfits, mainly suits with an open collar, ascot, and pocket square.

His Gambler outfit consisted of a purple suit, with matching pants and a wide-brimmed hat, seemingly inspired by early Southern gentlemen.

Other appearances include being mentioned in "Summer School: Chapter Four". 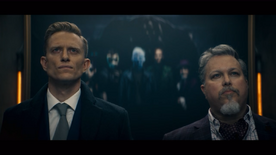 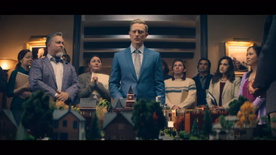 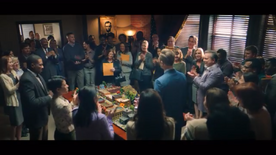 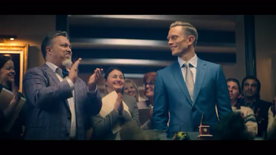 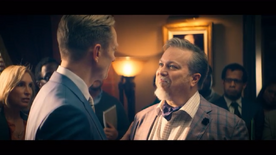 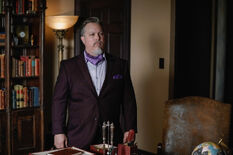 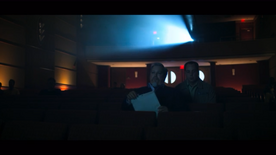 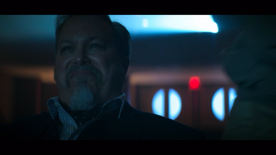 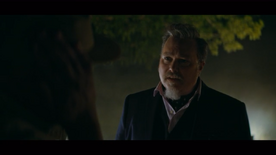 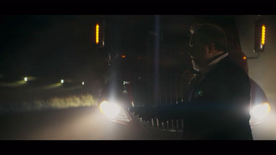 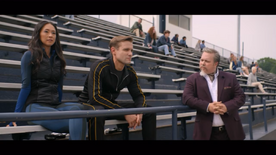 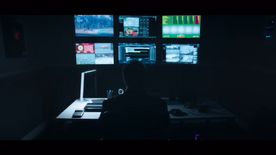 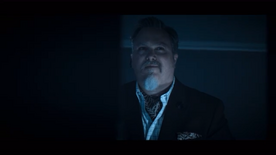 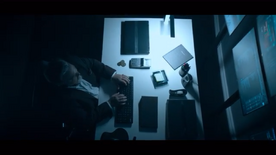 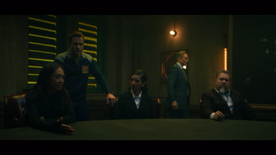 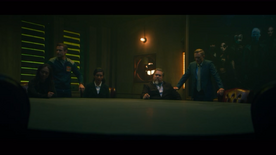 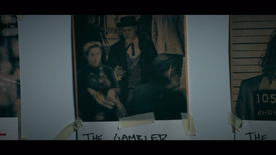 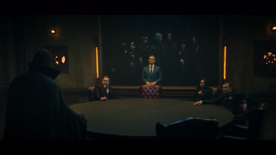 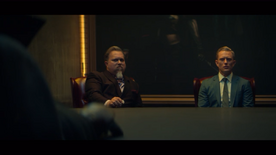 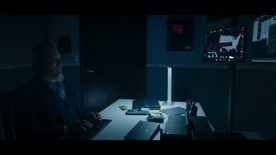 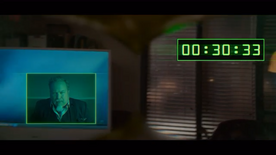 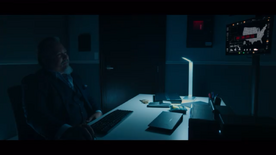 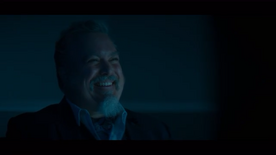 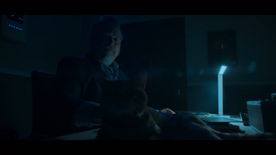 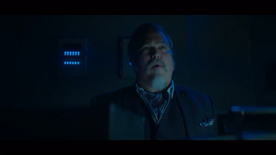 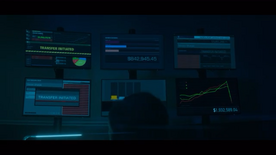 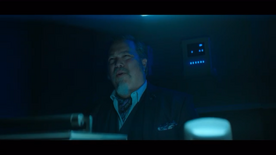 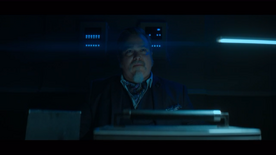 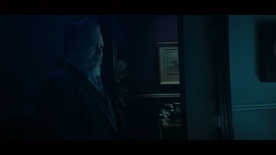