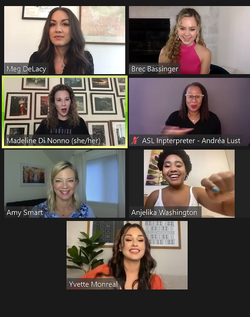 Please note that some answers were revised for length or conciseness. A full video of the panel should be released soon and will be added for your viewing pleasure. However, the integrity of the answers remains intact.

What attracted you to the role? What are we going to see from Barbara this season?

Amy: Superhero shows and movies are so popular. They spend so much money making these big epic shows and movies and sometimes they miss the boat on the human aspect. Amy was drawn to this because Geoff brings so much heart and soul into the characters and makes them more relatable. She loved how Barbara is trying to have a blended family. She finds a balance between her womanhood, mother, wife, and stepmother, and having a career. Also because it’s Stargirl she supports her daughter now that she knows who Courtney has become with the responsibility. She wants to be supportive but also protective. She’s part of the team now that the cat is out of the bag. It’s fun to be in the know this season. She’s still kinda gullible and doesn’t fully understand everything that's happening, but is trying to go along with it. She loves playing Barbara as it's her first superhero show. She loves how strong and grounded the female characters throughout the show are.

How is Barbara different from the original series? (Fan Question)

Amy: She hasn’t read all of the comics that Barbara is in, but thinks she has more heart in the show and isn’t as tough as she is in the comics. She’s been developed in a human way in the show. She was based on Geoff Johns’s mom, so he brought so much heart to the show. It’s loosely based on her, at least.

What are the challenges of being Stargirl while also part of this blended family? The darkness that is seeping in, talk about that.

Brec: In Season 1 Courtney dealt with the blended family aspect as that was a big thing for her. She had a lot of challenges and wasn’t open to new changes. She blamed Pat for moving them across the country and away from her friends, her school, and being in high school that's a big change for Courtney. Brec did love the arc between her and Pat throughout Season 1. By the end, Courtney accepted Pat as this father figure. It was very well-deserved and they had to earn their respective roles as father and daughter. For Season 2, Courtney has to find a balance between her superhero life and her normal life. For the darkness, Cindy finds the black diamond and that brings on a bunch of stuff.

What was it like playing a character that was originally a white man?

Anjelika: She went in to meet Geoff and the writers and they were very transparent that some people would hate that her character would be a black woman. Geoff wrote it very specifically and she’s grateful that he did. She feels connected to the original and new versions, as the comic version is a black woman with an amazing yellow suit. Anna Diop also got a lot of hate when she booked the role of Starfire in Titans and had to end her comments because of it. When they originally posted that Anj was going to be Dr. Mid-Nite they had to delete the initial post because of all the negative comments. She was disappointed but not surprised. The positive response has been a blessing for her. She feels so grateful and honored that people can relate to her and celebrate Beth. She celebrates Beth every day. She finds it amazing that Beth gets to keep her afro and loves when people tell her that live-action superheroes look like them because she didn’t have that growing up. She holds a lot of responsibility and gratitude for that.

At what point is Beth going to tell her parents off for being selfish and taking Beth for granted?

Anjelika: I don’t know. You’ll have to watch and find out. She grows a lot this season and has a lot of character development. The relationship with her parents does grow a lot this season. They're growing everyone's growing.

Your character is complicated with a trope of a mean girl, but beyond the surface of that, the response is because of her childhood. Can you talk about the nuisances of bringing the dimensions into your character?

Meg: It is very complicated. Cindy’s whole journey has been loss after loss. She’s struggling with putting on this confident show but also feeling unloved. She enters this story on her own with no support system or family. Meg did a deep dive on the underbelly of what it feels like not to have anyone to go to for help. Cindy relies on herself a lot but is also a teen girl and doesn’t have all the answers. Her going to Eclipso results in a big struggle between them. She’s trying to find guidance within that. She had this dreadful past - of accidentally killing her mom when she was seven after losing control of her anger. She’s just as lost as everyone else. She wants to find a family and team that gets what she's going through. She’s jealous that the JSA gets along so well. She wants that but goes about it in a terrible way.

Can you talk about the rebirth of Yolanda as Wildcat and the family thread of her being rejected?

Yvette: Yolanda sought validation in Season 1 and always strived to be the best before - best grades, best social life. But in Season 2 she becomes a stronger version of herself. She has this huge secret she’s hiding from both families - her found family and her real one. Since no one other than Courtney knows that she killed Brainwave, she feels alone in a sense. She dives deeper into her faith and religion because she doesn’t feel like she has anyone to go to.

If you could be any of the ISA/JSA members for a day who would it be? (Fan Question) Who would you recruit from the entire universe to be in your JSA/ISA? (Fan Question)

Do any of you have anything special you do before filming or to get into character? (Fan Question)

How do you feel knowing that your heroes are inspiring women/girls to make a difference? (Fan Question)

What comic storylines do you want to see adapted on the show?

The following information was either added randomly in the conversations or the result of the topic spiraling into something unrelated to the initial question.