These Season 1 Minor Characters are characters from the first season of Stargirl that have little to no information and therefore, do not warrant a page.

Mary Kramer was Courtney's best friend and neighbor when she lived in California. She's first seen in a flashback to Christmas Eve 2010 who converses briefly with Barbara Whitmore. In the present day, a now teenage Mary visits Courtney to see her off to Blue Valley, remarking that she will miss her friend. They hug and Mary notices Pat Dugan pull up in the driveway, noting that Courtney's new father has arrived to Courtney's disgust. She later texts her on her first day of school. As typical in a far-distance friendship, the once close friends are presumably growing apart as Courtney found a new hobby and circle of friends. Mary is also a dancer.

Maggie Kramer is the mother of Mary and a close friend of Barbara Whitmore, Maggie is seen briefly in a flashback to ten years ago. She assures Barbara that Courtney can stay with her and Mary while Barbara goes to work. She doesn't appear in the present day to bid her good friend goodbye.

Charlotte Balough is an employee at The American Dream and the woman who greets Barbara on her first day of work at the company. She welcomes Barbara back to Blue Valley, noting how much The American Dream has done for the two in the past few years. Charlotte shows Barbara around the large building and while on the stairs, she points out their CFO, Steve Sharpe, and Blue Valley councilman, William Zarick from across the balcony. She then tells Barbara to follow her to Barbara's new office, much to Barbara's excitement, as she wasn't expecting an office which makes the woman laugh.

Travis Thomas is a friend of Henry King Jr. and a student at Blue Valley High School. He’s the one who sits on the bullied kid’s car, and the first one to be knocked out by the mysterious defender with a glowing staff.

Josh Hamman is a student at Blue Valley High School. He was in his mother's car with a friend at the drive-in movie theater when Henry King Jr. and his jock friends started harassing him, they stopped after Courtney Whitmore interfered and drew their attention.

Sandman was a hero and member of the Justice Society of America. He fought in the final battle against Injustice Society of America in which he was likely killed by Icicle as his corpse is seen frozen. He wore a long trench coat and sported a Hat and gas mask. He was later seen pictured in "Icicle" sitting at the table alongside his fellow JSA members.

Mercedes is the housekeeper at the King residence and a Cafeteria Monitor in Blue Valley High School. She spotted Henry stealing money from his father's wallet but didn't say anything to him about it. He then ordered that she make him eggs so she hurried away quietly out of fright. Later, Henry read her thoughts about his father and her concern for Henry's well-being, but also her opinion that Henry would be better off without his father around.[1]

Doctor Weerd is a super villain who had been defeated by Star-Spangled Kid and Stripesy. He is the only Super villain to not be associated with the Injustice Society of America.

Mr. Levine is a math teacher at Blue Valley High School. While teaching, he makes a joke about the students only using math a fraction of the time, which earns groans from the class. Mr. Levine mutters that they are a tough crowd. A few minutes later, he calls Courtney and Cameron out for talking during class. He tells them that this is math class, not the Dating Game.

Mr. Levine later learns that Isaac attacked a someone who was bullying him by hitting the bully in the head with his tuba. Mr. Levine was shocked and asked Isaac what his mom would say. Isaac says that she told him to do it, but Mr. Levine didn't believe him and dragged him to see her when the football field suddenly opened up and a giant tower with three satellite dishes attached emerged. Mr. Levine soon fell under Brainwave's control and subsequently died when he tried to resist it.

Barry is a janitor at Blue Valley Medical Center who notices a broken brick on the sidewalk. Before he can look up and catch Wildcat scaling the way, Beth Chapel greets him happily. They talk as if they are old friends with her telling him about the food she made for her mom. Barry explains that his shift is over. They say goodnight and part ways. His voice is later heard on the opposite end of a phone call when he is reprimanded by a night nurse for "throwing things the closet" - an offense that wasn't his, but rather, Stargirl's.

Zeek is the owner of a junkyard who shares multiple scenes with Pat Dugan, who is picking up a number of interesting parts. He points out where certain parts are and even sells Pat an exhaust pipe for $19.99 with no refunds or returns. He is a gruff and scraggly man whose primary goal is just to run a good and honest small-town business in Blue Valley, and only blissfully aware of what Pat was actually doing with all the parts that Pat kept buying off of him given Dugan's technical prowess. Later, Zeke tows Matt Harris's destroyed pickup truck to Pat Dugan's garage. He notes that if he didn't know any better he would think King Kong punched the truck due to the size and depth of the dent.[2]

An unnamed woman is a night nurse at Blue Valley Medical Center. She checks on her ventilated patient and doesn't see Wildcat hiding behind the door. She later hears the commotion caused by Stargirl and the Cosmic Staff in the storage closet. She goes to investigate finds the empty room a mess, as Wildcat falls onto the receptionist area and finds the visitors log. The nurse comes back and blames the janitor, even calling Barry to reprimand him for just "throwing things in the closet like that". She compares the mess to a tornado.

An unnamed elderly woman is the Grandmother of Yolanda Montez. During a flashback to three months ago, Grandmother happily greets Yolanda at breakfast and they hug. She is seen again in the present day when Yolanda returns home from school, and again at night when Yolanda gives a speech on how she is ready put the past behind her. Yolanda's Grandmother has no speaking lines.

An unnamed man is an Empire Technician on Blue Valley.

Coach Hank was the coach of the Blue Valley High School football team, During football practice, he benched Artemis Crock for punching one of her teammates, Brian, in the face. Later that night, as the coach tries to get into his car, he's menacingly greeted by Artemis' parents, Larry and Paula. He tries to explain that Artemis needs to control her temper, delighting Crock, and Brooks. Coach admits he may be new but he's seen parents like them before and threatens to bench her for the rest of the season. Crock doesn't take too kindly to it and bashes his bat against his head, killing him. Later, Larry and Paula buried his body in the woods. It is mentioned that Hank is the third coach that Larry and Paula have killed in two football seasons, much to the chagrin of Jordan and Anaya.

Mr. Paris is a geometry and math teacher at Blue Valley High School. 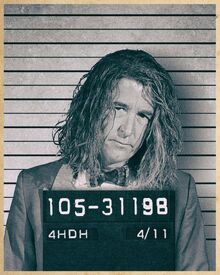 The Fiddler was previously mentioned in "Hourman and Dr. Mid-Nite" as the only ISA member to use a violin. Pat claimed he was a man of Irish descent. His portrait is included in the ISA group portraits seen in "S.T.R.I.P.E.", "Wildcat", "Hourman and Dr. Mid-Nite", "The Justice Society", and "Shiv Part One". While Pat was describing the ISA to the newly assembled Justice Society of America, he came to The Fiddler. He began describing him as an Irish man but was interrupted by Courtney who believes that the mantle now belongs to Anaya Bowin. He is also the father of Isaac Bowin. Paula Brooks once said that Anaya's husband could have awakened a comatose Brainwave, alluding to the fact that The Fiddler is Anaya's husband. His status is unknown.

Ed Reilly previously appeared in a photograph briefly seen in "Shiv Part One" when Jordan Mahkent opens an envelope to see his picture. In this episode, Jordan arrives in Reilly's hotel room and recaps his work history. He worked for both Firebrand and Bannerman Chemicals. Jordan calls Reilly out for working for the same company that built a school on top of a toxic waste plant. The toxic waste caused Jordan's wife, Christine Mahkent, to fall ill. Reilly reasons that he wasn't involved in the waste plant plan, but Jordan counters that while he didn't profit from it or sign the orders, he also wasn't a whistleblower. Reilly tries to escape but Icicle freezes him using his ice breath which kills Reilly. His frozen corpse falls to the ground and shatters in front of Icicle.

Green Arrow is a hero and member of the Seven Soldiers of Victory. He appeared in a photograph in "Brainwave" and "Shining Knight".He is seen in a hero suit with a hat, Quiver and bow. He seems to be associated with speedy as he's standing in front of him.

Speedy is a hero and member of the Seven Soldiers of Victory. He appeared in a photograph in "Brainwave" and "Shining Knight". He is seen in a hero suit with a hat, Quiver and bow and could be associated with Green Arrow as he's standing behind him.

Crimson Avenger is a hero and member of the Seven Soldiers of Victory. He appeared in a photograph in "Brainwave" and "Shining Knight". He is seen wearing a hat, mask, and cape. He seems to be associated with Wing as he's standing behind him.

Wing is a hero and member of the Seven Soldiers of Victory. He appeared in a photograph in "Brainwave" and "Shining Knight". He is seen wearing a hero suit and mask. He seems to be associated with Crimson Avenger as he's standing in front of him.

Vigilante is a hero and member of the Seven Soldiers of Victory. He appeared in a photograph in "Brainwave" and "Shining Knight". He is seen wearing Cowboy attire which includes a bandanna, a lasso, and even Revolvers.

LeeAnne is a young girl whose father is affected by Brainwave's manipulation. As Jordan walks through the street he hears the girl begging her father to wake up, as she doesn't understand what is happening to her father. She asks Jordan what's going on, and he assures the girl her father will be alright. She asks what's wrong with her dad, and Jordan responds he and everyone else will think differently once it's over, they will think good things and be better people. The girl retorts her father is already a good person, but Jordan simply chuckles and utters she will see and leaves. LeeAnne turns to her father and embraces him.