The S.T.R.I.P.E. Armor (Subatomic Tactile Robot Internet Pat Enhancer) is a fifteen-foot armored robot that was built by Pat Dugan after he retired from the JSA. It allows Pat to operate as the sidekick, S.T.R.I.P.E. The armor was dismantled during a fight against Solomon Grundy, rendering the armor useless, however after six weeks, Pat managed to fully repair the armor.

S.T.R.I.P.E. is a grey and silver robot made completely by Pat Dugan out of refurbished car parts. It has two headlights on its chest that guide him at night. The chest cavity is outlined in red and opens so Pat can enter and exit at will. Handlebars are attached to his back that allows for Stargirl to hold onto him while they are moving quickly, or flying via the boosters inside his boots. The eyes on the robot glow red when the robot is active. Its knuckles are black while red stripes accent the robot's joints. In the center of its chest is a green circular device that has unknown purposes. Pat controls the armor from inside the chest cavity by using joysticks. The joysticks control S.T.R.I.P.E.'s arms, legs, and movements. Pat communicates with Stargirl through a speaker that disguises his natural speaking voice. Inside the chest cavity is also a button with a fist on it. When pressed, S.T.R.I.P.E. launches his fist at the enemy.

Courtney yells at S.T.R.I.P.E. to get away from her, but Pat says he needs to get her somewhere safe. He outstretches the robot's hand. Courtney climbs up the robot to hold on to the bars on its back. The robot continues to short-circuit at its joints, prompting Pat to curse and Courtney to ask if it's safe. They fly up into the air and escape before Brainwave exits the tire warehouse and looks up at the sky, noticing the fly machine. Later, Courtney asks why Pat even built the robot, to which Pat said he wanted to help Hourman but Rex insisted on doing it alone. The night he saved Courtney from Brainwave was the first time he ever used the robot. With a promise to help Courtney with Brainwave and Icicle, Pat works to get the suit up and running. He has many trials and tribulations in his attempts to master control of S.T.R.I.P.E. but finally managed to figure it out after many repairs and self-administered first aid.

At Blue Valley High's parking lot, Brainwave is met with S.T.R.I.P.E. and asks him who he is. Pat, who hasn't thought of a new name yet, tells him someone looks for justice. Brainwave sends a mental attack that briefly incapacitates Pat, who responds by throwing a dumpster at him. Brainwave stops it mid-air and hurls it at the sky. Seeing a car, he proceeds to do the same as Brainwave does as well. After his last shot, he fires his fist at him, but Brainwave catches it at the last second and twirls it back at him, knocking him down. The robot falls, and Brainwave begins to crush him with the car and school bus next to him. Stargirl arrives and fights Brainwave but is pinned down. S.T.R.I.P.E. activates one of his headlights which momentarily blinds Brainwave and gives Stragirl enough time to render him incapacitated.

After the fight, Stargirl and S.T.R.I.P.E. return home when Courtney concludes that Pat needs a new name. She recommends STRIPE, but as an acronym. She settles on, "Subatomic Tactical Robot Internet Pat Enhancer". She remarks that the name is cool.[1] STRIPE later fought Icicle which is when the villain froze Pat's controls and stopped STRIPE from helping Stargirl. However, when the ice thawed, STRIPE was able to catch a falling school bus and return it to safety. That night, in an attempt to convey the seriousness of the superhero life, Pat flew Courtney to the JSA's headquarters in California using S.T.R.I.P.E.[2]

S.T.R.I.P.E. later arrived late to a fight between the new Justice Society of America, Tigress, and Sportsmaster. Upon seeing the robot, the JSA was stunned but Stargirl assured them that the robot is with them. Tigress and Sportsmaster went into retreat upon seeing the giant and fled the scene. Upon returning to The Pit Stop, where Pat stores the robot, Yolanda, Ricky, and Beth were stunned and remarked on how Pat managed to build the robot completely out of old car parts. Yolanda remarked that he must have used over a hundred cars to build it.[3]

Months later, Pat uses STRIPE when he and Stargirl venture into the underground tunnels during their mission to stop Project New America. During this time, Pat falls under the mental manipulation of Brainwave which allowed Brainwave to take control of STRIPE and use the robot to attack Stargirl.[4] Pat regained control over the robot when he fought against Brainwave's reprogramming, only for the hold to break completely and Pat to regain control over the robot once the machine projecting Brainwave's power was destroyed.

STRIPE isn't too present in the showdown against the ISA but does assume a front position when Jordan is defeated. Pat jerks the hand of STRIPE back to deliver a defeating blow to Icicle when he is suddenly punched across the room by a released Solomon Grundy. Pat advises Courtney and Wildcat to find the machine, as he'll take on Grundy and protect Hourman who was knocked aside by Grundy. STRIPE stands up and runs into Grundy, picking him up like a rag doll and pins him to the wall. They give several blows as they start their battle.

The fight between Grundy and S.T.R.I.P.E. grows vicious until the robot lands a strong throw that momentarily disorients the zombie. STRIPE is damaged from the battle and sends a punch, but Grundy grabs the robotic arm and rips it out. The robot staggers backward, which is when Grundy strikes Pat with STRIPE's arm. The robot falls backward into a wall, with Grundy delivering blow after blow as he figures out his opponent's weakness. He removes the robot's legs and then strikes the robot's chest with both his hands. He successfully rips the cockpit doors open after several pounds and roars at Pat who is fully exposed now that the robot is destroyed. Pat is saved by Hourman who advises Pat to forget about the damn robot and go save his wife. Pat obliges and abandons the dismantled robot.

Once the ISA is destroyed, Pat and his family return home. Six-weeks later, they celebrate the Christmas holiday just in time for heavy snowfall. With the battle behind them, Pat takes STRIPE out for a joyous fly through the snow-covered forest of Blue Valley where he greets Stargirl at a water tower. He sits next to her, which causes the tower to wobble, and STRIPE exchanges a happy look with Stargirl. He follows her lead as she soars into the air with the Cosmic Staff, STRIPE flying next to her and into the sky.[5]

The mechanic Zeek goes beyond the "Employees Only" door at The Pit Stop and discovers S.T.R.I.P.E. for himself. He is taken aback by Pat's mechanical project, stating that he new Pat was building something but didn't think it would be a robot. Pat carefully states that it's a private project, but Zeek understands and won't tell anyone. He wants to install a flame thrower in the arm and states he'll be back tomorrow to do that. Pat is left powerless to Zeek's decisions.[6] As a man of his word, Zeek arrives the next day and installs the flame thrower. He gives a demonstration that leaves Pat and Jennie in awe. Zeek brushes it off as the flame still being weak but he can fix that. The button to activate the flamethrower is red with the outline of a black flame.[7]

As Zeek works on expansions for S.T.R.I.P.E. that includes a twelve-foot-long chainsaw, the Injustice Unlimited take matters into their own hands to level an upcoming fight. Artemis Crock and Isaac Bowin attack The Pit Stop and demolish S.T.R.I.P.E. by tearing it apart from the limbs. They remove the robots head, hands, arms, and leave serious damage to the body of the robot. They also beat Pat Dugan unconscious.[8]

Zeek, Pat, and Mike work together throughout the next few weeks to repair the robot.[9][10][11] As they do, Zeek upgrades the flame thrower and chainsaws. By the time the JSA is ready to fight Eclipso, only one last rare part is needed before the robot can take flight once again. Mike asks Jakeem to make a wish from Thunderbolt for the missing part, allowing Mike to fly the robot into the fight. He grabs Eclipso and throws him into a car. He uses a walkie talkie to communicate with Zeek who is still at The Pit Stop. Mike uses the chainsaw to attack the being before switching to a flame thrower, at which point, Zeek throws the machine away. When Thunderbolt goes to electrocute the creature, Eclipso reacts by throwing Thunderbolt into S.T.R.I.P.E. which causes the electrical features to power down. After several minutes, the robot whirred back to life.[12] 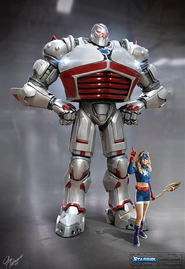 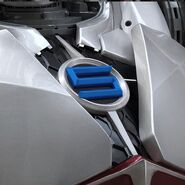