The Icicle Suit is a different version of attire that Jordan Mahkent changes into when fronting as the supervillain, Icicle.

The Icicle suit is the only super suit that resembles that of a normal outfit. He wears distressed trousers that are slightly baggy, resembling that of military pants in their styling. A tight white shirt goes over his torso and tucks into his trousers. His pants tuck into black, leather combat boots. A simple black leather belt wraps the waistline of his pants. Over his white shirt, he wears a distressed leather trench coat. He wears a rather large bronzed key pendant that resembles around his neck as a nod to his Norwegian roots.

During a flashback to Christmas Eve, 2010, Icicle is seen wearing this suit while fighting against the Justice Society of America.[1]

Icicle wears the suit while confronting Stargirl for the first time.[2] 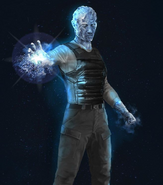 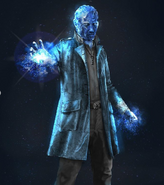