1
Hunter Sansone (born December 2, 1993) is an actor. He portrays Cameron Mahkent as a series regular on Stargirl.[1]

Hunter was born in St. Louis, Missouri. His acting credits include Stargirl (2020) and Safety (2020). He began his acting career as a teenager and entered into a local studio in the St. Louis area. After a few years of training, he moved to Los Angeles where he began his professional career. 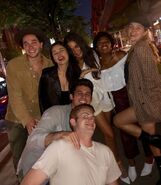