Eclipso is a life essence trapped inside of a black diamond. He is an ancient entity of corruption and vengeance. Brimming with a cold, terrifying darkness, he exploits the flaws of others, reveling in the impure and sinful, sadistically feeding off the dark side of humanity.

The diamond itself is from Diablo Island, a now-forgotten island in the Pacific Ocean, that was removed from maps by 1832, as those who visited never returned. According to legend, there were two waring tribes living on either side of the island. One tribe summoned an evil entity of vengeance trapping it inside the black diamond.

In the 1930s-40s, Eclipso used a ten-year-old boy named Bruce to tempt his latest victim, Rebecca McNider. She fell victim to Eclipso when she was lured across the street to a birthday party her mother forbid her from attending. Eclipso encouraged her to steal a doll from the pile of presents. When she did, his vessel named Bruce appeared behind Rebecca and held up the black diamond. Rebecca was found dead by her mother later that day.

Years later, an explorer named Bruce Gordon rediscovered Diablo Island, but when he arrived everyone had been dead for decades. He wrote many books about the island and was the only person who ever returned.

At some point, William Zarick, also known by his villainous counterpart The Wizard, came into possession of the diamond containing Eclipso. He hid it in his storage unit in Blue Valley, Nebraska.

Cindy Burman visits former Injustice Society of America member William Zarick's storage unit and begins to tear it apart. She empties boxes, crates, throws aside objects, and shakes out envelopes. She takes a box from the top shelf and sets it down, removing a smaller wooden box from inside. She sets it on a shelf and takes out her flashlight, opening the small box and removing a black diamond. She holds it up shining her flashlight on it, illuminating it blue. She smiles eerily stating that she's seen it in there, calling the diamond Eclipso. A sinister laugh comes from the diamond as Cindy smirks.[1]

Decades ago in the small town of Melody Hills Indiana, a little boy named Bruce lures a ten year old Rebecca McNider off her porch. He wants them to attend the birthday party across the street, even though Rebecca's bother forbade it. Rebecca runs into the street in excitement, and barely avoids an oncoming truck. She notices a pile of presents for the birthday girl and Bruce appears behind her. He encourages Rebecca to take one of the presents; she didn’t get anything today and no one is looking. Rebecca runs up, steals a package, and hides behind the bushes to open it. When she does, the doll inside is deformed and dirty. Its eyes glow red. She drops it in shock but it turns back into a doll. She turns to see Bruce‘s face turning black and his eyes red. He raises a black diamond and shames her for stealing the doll. Seconds later, they are engulfed in purple light. Rebecca's mother goes searching for her daughter but what she finds makes her scream in horror.

In the present day, Cindy visits the Injustice Society's former headquarters and removes the diamondfrom her purse, a purple hew emitting from the stone. A deep voice comes from the diamond, stating that he's ready to serve her. She agrees but they have some recruiting to do first.[2]

Cindy returns to her house to find Bobbie Burman celebrating her freedom. Cindy is saddened that her mother changed the locks on the house and holds up the black diamond. As the diamond glows, Bobbie's left eye turns black and glows in response. Throughout the next day, Bobbie is haunted by Eclipso's voice telling her she won't ever escape Cindy. Eclipso taunts that she almost had her old life back before Cindy came back and ruined her chances of freedom. She holds up a knife and sees a reflection of images from before her abduction in the blade. Eclipso appears in the reflection and tells Bobbie to kill Cindy as it's the only way she'll ever be free of the girl. Her eye glows black in response. That night, Bobbie attacks Cindy when she gets home, despite knowing that Cindy is much more powerful than her. Eclipso takes control of Cindy’s body and conjures up a diamond. He calls Bobbie sinful and corrupted. He pulls Bobbie's life essence into the diamond and then her whole body, until nothing remains but a pile of ash. Cindy fights free from Eclipso’s hold and he remarks that he had to take control to protect her. She protests that she can protect herself. She asks what he did to Bobbie and he admits that he fed off Bobbie's hatred, desperation, and corrupt soul. Cindy tells him that she's in control and threatens to put him back in the box if he doesn't behave. He concedes that he's only here to serve. Cindy emotionally states that she didn't want Bobbie to die.[3]

In the days the follow, Cindy prepares to recruit members for her new team Injustice Unlimited. She scolds Eclipso for his recent murder, but he believes her lingering trauma from the death of her biological mother is the reason she's upset. He projects a hallucination of Cindy's mother but she forces him to send it away. She threatens to throw his stone in the deepest ocean if he ever tries something like that again. Eclipso submits that he's there to serve her. He then conjures a version of the Injustice Unlimited where the ISA portrait is, assuring her that their goals are the same. That afternoon, Cindy uses Eclipso to make Artemis hallucinate S.W.A.T. agents preparing to assassinate her parents who had recently escaped prison. Artemis lashes out and attacks who she believes are S.W.A.T. agents, though in reality, she attacks Brian Tanner Balloid and Courtney Whitmore.

Meanwhile, Courtney learns from former ISA member The Shade, that Eclipso murder Dr. Charles McNider/Dr. Mid-Nite's ten-year-old daughter Rebecca. Determined to learn more about the ominous villain, Courtney and the JSA do research the old-fashioned way; through books. They learn that the diamond itself is from Diablo Island, a now-forgotten island in the Pacific Ocean. It was removed from maps by 1832, as those who visited never returned. According to legend, there were two waring tribes living on either side of the island. One tribe summoned an evil entity of vengeance trapping it inside the black diamond.[4]

When Cindy fails to recruit Cameron Mahkent into her new team, she purposefully bumps into Blue Valley High art teacher Paul Deisinger. Deisinger suddenly starts hearing Eclipso’s voice in his head claiming to be his muse. Paul beings to experience a bad cough and ends his class early, only to discover he's coughing up paint. Eclipso covers Paul's eyes in a paint-tinted film which inspires Paul as he sees what he needs to paint. He is then forced into painting the black diamond all over the walls of the art room. When the JSA tracks the recent storms caused by Eclipso’s power to its epicenter at the school, they are shocked to discover the art rooms walls covered in paint. The paintings around the room are of a black diamond. Stargirl is horrified when a horrific face protrudes from the wall before spiraling up the wall in a tentacle of black paint. The group is overcome by painted images of their fears and regrets, the images overcoming their minds as their eyes glaze over. Stargirl is unaffected and confronts a possessed Deisinger covered in an organic paint like substance. Stargirl is able to free him by using the light of the cosmic staff to overcome Eclipso’s darkness.[5]

Described as pure evil with no regard for life, Eclipso is the most dangerous foe the JSA has ever faced. He brims with a darkness that he brings to everyone he comes into contact with. He manipulates, controls, and kills anyone that he deems sinful. As an entity of vengeance, Eclipso searches for those who have wronged so that he can punish them by slowly corrupting their minds until they either harm themselves or others. He is patient in the way that only someone untouched by time could be, he waits for the perfect opportunity to strike or enact his plan. He has also been shown to kill children with no hesitation in order to get what he wants.

Eclipso is an essence trapped inside a small diamond that appeared to be blue in Cindy's flashlight. When Cindy first picked it up it seemed to be a diamond with a black center, however, when she called it "Eclipso" a blue mist appeared inside the diamond. When he assumes control of Cindy's body, half of her face turns black with veins sprawling across the other side. Her eyes turned blood red.

In his natural form, Eclipso is of human-semblance with grey skin that is marred with scars and indents from his many wars. He has hooked ears and a large nose. His most striking facial feature are his bright red eyes which are paired with a sinister smirk. He wears an ancient tunic with battle armored shoulders, has large pieces of leather wrapped around his arms, and burgundy gloves. The leather on his arms stretches down to over his knuckles, and certain pieces have runic symbols engraved on them. He wears gold rings on all ten fingers. The front of his tunic is textured in a wave but also appears slightly shredded. Around his neck he wears a large amulet with a stone setting. Over his head is a burgundy hood.

Other appearances include being mentioned in "Summer School: Chapter Three". 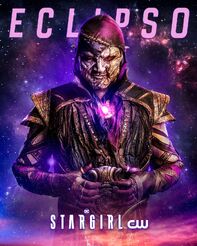 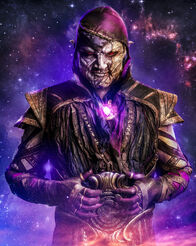