Protective suit
The Dr. Mid-Nite Suit is a protective suit used by Beth Chapel as the crime-fighting heroine, Dr. Mid-Nite. The suit was previously worn by Charles McNider, who supposedly died in a battle against the ISA.

The Dr. Mid-Nite suit is a two-piece protective suit used for fighting crime and aiding her fellow JSA members in battle. Her top is a solid red leather with two textures integrated into it. On her chest is a circular reflective mirror. Her gloves are made of customized leather that holds pouches and pockets for potions and healing salves. Dr. Mid-Nite wears a thin brown belt tied through two silver loops. On her belt, are numerous pouches and bags. Her pants are plain beige and reach into her knee-high black boots. She has a forest green hooded mask that goes over her head and only leaves her nose and mouth exposed. On the center of the hood is a circular imprinted jewel. The hood attaches to a matching colored cloak that reaches the ground. Around her eyes is a darker brown outline for a mask, that her vibrant green goggles rest on. She wears a deep green textured leather hooded cloak with its bottom that reaches to the ground due to her height. 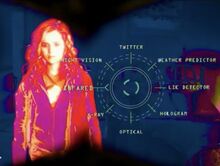 The goggles supply tactical knowledge to the wearer and integrate into the rest of the Golden era-inspired updated design. The goggles also provide Dr. Mid-Nite with several incredible visual enhancements, abilities, and feats. These include, but are in no way limited to, X-Ray vision, night vision, and infrared vision. She can also create three-dimensional projections and detect when a specific person is lying. The goggles also have a social dynamic that allows the wearer to stay up-to-date with the latest information. Dr. Mid-Nite can access the weather forecast and weather predictions, and access Twitter.

Brilliant doctor and engineer Charles McNider wore the suit for many years while fronting as the superhero Dr. Mid-Nite. He wore it for all of his significant battles against the ISA and other foes. He was commonly photographed wearing it. The suit was usually paired with his trusty owl. 10-years-ago during the JSA's battle against the ISA, Dr. Mc-Nider was consumed by an ISA member and died in the suit. Pat Dugan presumably took the suit and kept it and other Dr. Mid-Nite related artifacts in the JSA's headquarters.

When Courtney Whitmore decided to remake the JSA and recruit new members, she mentioned recruiting a new Dr. Mid-Nite. That night, stole several artifacts from the JSA's headquarters. Dr. Mid-Nite's helmet was amongst those items. Beth Chapel happened upon the goggles while visiting the Whitmore-Dugan household. She put the goggles on and proved herself to be a valuable asset of the Justice Society of America and became the new Dr. Mid-Nite. She didn't receive her suit immediately, and instead, only received it before the group's first fight against Tigress and Sportsmaster.