It premiered Stargirl on May 18, 2020, sharing streaming rights and platforms with The CW, who airs the episodes the day after they premiere on DC Universe.[1] Stargirl was renewed for a second season by both networks, with DC Universe having sold platform rights exclusively to The CW.

DC Universe officially announced it would stop producing television programming and would rebrand to DC Universe Infinite, a comic book subscription service. According to the press release: 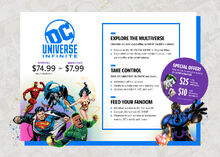 DC’s premium digital comic book platform provides members with an expanded collection of comics and Original Graphic Novels, spanning over 80 years of the DC Multiverse. Fans can also download comics, graphic novels, and originals for unlimited offline reading on their favorite devices from a smartphone or tablet.[2]

For DC UNIVERSE subscribers who want ongoing access to premium DC originals, the special DC UNIVERSE monthly member offer to HBO MAX has been extended. In celebration of Batman Day and the announcement of DC UNIVERSE INFINITE, a special offer for eligible monthly subscribers to upgrade their service to include HBO Max for an additional $4.99 per month for a limited time is now available through October 30, 2020.