September 12, 2020
DC FanDome was a 24-hour immersive experience into the world of DC Comics only at DCFandome.com. Stargirl was part of a series of panels on September 12, 2020. The title of this event is officially known as DC FanDome: Explore the Multiverse.

In order to super-serve the world’s finest fans, DC FanDome was transformed into a two-part event: the eight-hour DC FanDome: Hall of Heroes show on Saturday, August 22, followed three weeks later by DC FanDome: Explore the Multiverse, a 24-hour, on-demand experience accessed via the DCFanDome.com website.

DC FanDome: Explore the Multiverse included a "choose your own adventure" experience for those virtually attending the event, allowing them to create their own schedule for what they want to watch. Much of the content from the other "islands" in the original schedule will debut on this date. All of the content was on-demand and available to stream for 24-hours from its initial release time.[1]

Imagine all the Super Heroes and Super-Villains you’ve ever loved finally coming together in one place to celebrate DC’s past, present, and future. Accessible for 24 hours at DCFanDome.com on August 22, 2020, and September 12, 2020, respectively, the global event will immerse fans into the DC Multiverse, with new announcements from WB Games, Film, TV, and comics, as well as an unprecedented opportunity to hear from the casts and creators behind your favorite feature films and TV series.

DC FanDome: Explore the Multiverse will offer DC fans the experience of a lifetime, with full access to more than 100 hours of on-demand content, beginning at 10:00 am PDT. This is the time for fans to suit up and determine their own adventure, selecting from exclusive panel sessions, screenings, and never-before-seen content from the DC Multiverse of films, television, comics, and games.

Heroes Behind the Action (InsiderVerse, 20 min)

DC Down Under: Australia and New Zealand (Watchverse, 120 min)

During a phone call question, Brec was asked what she is hoping to see more of in Season 2. She answered that, aside from the romantic stuff, she wants to see more of the rivalry between Courtney/Stargirl and Cindy/Shiv.

The cast and crew reunited to answer fan questions and questions prepared by their host, Lea Thompson, who directed the Season 1 episode, Shiv Part One. They played games such as Things Dr. Mid-Nite Knows About Me where everyone gave five trivia points about themselves. While they weren't able to give much information on the upcoming second season, they were able to give a few teasers.

Geoff Johns is, "excited for people to see more of Grundy, he's not gone yet, alluding the monstrous Solomon Grundy's return. The last time Grundy was seen he was exiled from Blue Valley by Rick Tyler.

When asked what they would like to see in the second season, Brec Bassinger wanted to see more of the interactions between Courtney/Stargirl and Cindy/Shiv. She finds that rivalry interesting and fun. Yvette Monreal hopes to see more of Yolanda's family subplot and her character's family advance in the storyline. Especially with the fallout after Yolanda's slut-shaming incident prior to Season 1.

Geoff added that one of the more important things for him at the end of the Season 1 finale Stars and S.T.R.I.P.E. Part Two was to introduce Eclipso. He teased that Eclipso's involvement and Cindy discovering the diamond is very important for the second season.

A fan asked about Dr. Mid-Nite's owl, and Geoff claimed that they will definitely be talking about Hootie at some point. Geoff also teased that the pink pen that Courtney disregards in Season 1 will get more screen time. They have plans for the pen but, "we do have so many other things to explore with these characters, and other avenues and other characters to meet and introduce, we’ll do it the best we can and we’ll do it at our own pace. But we’ll definitely be playing with things like the pink pen in Season 2".

Yvette Monreal spoke on the importance of portraying a Latina superhero on television. "It’s a known fact that Latinos are underrepresented in television. I feel like I’m one of the only Latina superheroes on TV. To be able to be Latina and be a superhero, that’s extremely important. I feel like a lot of people say this, but it’s so cool to have little kids look up to you and say, 'Hey, that could be me,' or follow their dreams. I’m so glad I’m representing the Latinx community".

Anjelika Washington spoke on the importance of playing an African-American superhero on television. "For me, as a Black woman, I’m just so grateful that we get the opportunity to do this. Growing up, I never saw a live-action Black female superhero ever, so I’m just really excited for every Black and brown girl to be able to see themselves through our cast whether it be through me as Beth or Yvette as Yolanda. I’m just really grateful and honored that we both get to share an amazing responsibility to be representation for young girls who look like us, so they know one day, 'I can also be a superhero,' and there is no limit and no ceiling on any of your dreams." 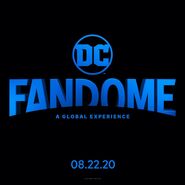 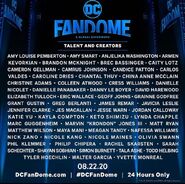 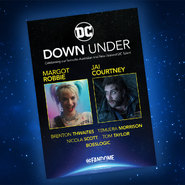 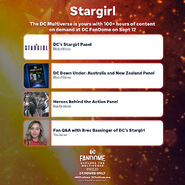 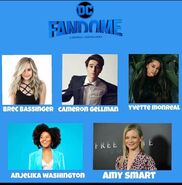