Blue Valley High School (established 1891) is a local public high school in Blue Valley, Nebraska. It is home to many students, but most notably, the next generation of heroes and villains.

The graduating class of the former year ranked in the top 1% of the nation.

Three months ago, the school held a student body government election. Cindy Burman and Yolanda Montez were the top candidates for class president, with Yolanda eventually being elected. Cindy, jealous of Yolanda's success, set a group text to the students and faculty that contained topless images of Yolanda. Humiliated, Yolanda was forced out of the presidency.

Blue Valley High prepares for another year with a fresh batch of students. It hosts its open house, which turns to a confrontation between Brainwave and Courtney. He commands her to bring the Cosmic Staff to the school at midnight or he will harm her mother. That night, Pat Dugan goes in Courtney's stead, using his S.T.R.I.P.E. Armor to confront Brainwave. Stargirl suddenly arrives and battles Brainwave in the parking lot. During the battle, she tries to blast him with the Cosmic Staff but misses, and shatters the BVHS school sign. A school bus, several cars, and parking signs were also damaged that night.[1]

Courtney goes to school the next day and notices the janitor cleaning up the debris that is the BVHS sign. Students gather around the sign looking at it in awe, but Courtney quickly walks by to avoid suspicion. When she goes inside this school, she notices regional talent show paraphernalia decorating the halls and a student advertising the show. On the way home from the talent show, Stargirl's fight with Icicle moves to a bridge where the BVHS students are traveling home from the talent show. Icicle uses his ice powers to freeze the bridge over and cause an accident. Luckily, STRIPE intervenes and saves the bus and everyone in it. However, Icicle uses his powers again when everyone is safe to cause a fatal car accident that kills one of the students. The school held a memorial for the student that night.[2]

Courtney learns that a few months prior, now social outcast Yolanda Montez was one of the more popular girls before her boyfriend, Henry King Jr., betrayed her by leaking her topless photos. Yolanda was even in the school presidential race against Cindy Burman. Courtney follows Yolanda into the school gym where she begins what will become a long term friendship.[3] The girls work together to find new recruits for their superhero team, eyeing a few students at the school before deciding against them. Courtney temporarily stores the JSA's artifacts in her locker. Meanwhile, Cindy makes a point of inviting a select few students to her house for a Halloween party that evening.[4]

As school goes on as it would normally would, Artemis Crock remains the star player of the football team until her coach benches her for unruly aggressive tactics against a teammate. Artemis's parents become upset that the coach benched Artemis but not the male instigator of the fight. Larry and Paula, who is also the gym teacher at the school, take matters into their own hands and confront the coach after hours in the BVHS parking lot. They try to threaten the coach into putting Artemis back on the team but he refuses. They promptly hit the coach over the head with a baseball bat and bury his body in the woods. They are reprimanded by Jordan Mahkent, who received a text from Principal Anaya Bowin complaining about them killing another faculty member.[5]

In the days that follow, Courtney is paired with Cindy Burman for science class and they almost begin a friendship over their mutual plans not to attend the upcoming homecoming dance. At the football game that night, Cameron Mahkent works up the courage to ask Courtney to the dance and she accepts, canceling her plans with Cindy which upsets the teen. Courtney accepts this and returns to her seat when she sees Principal Bowing acting oddly. She suits up as Stargirl and follows Bowin, but has an untimely collision with the supervillain Shiv. Their battle crosses many hallways and shatters doors before they stumble into the gym. The blasts from the Cosmic Staff bounce off walls but Shiv gains the upper-hand against Stargirl and nearly defeats her. Stargirl's amnesiac ally saves her life while the staff searches for Pat Dugan. It leads him to the gym where Stargirl lays unconscious.[6]

After the battle, janitor Justin experiences hallucinations of holding the Cosmic Staff while he works.[7] He returns to his janitorial closet where he doesn't seem bothered by the medieval paraphernalia in his possession. He then hallucinates Dragon King in the mirror before looking at a photograph of The Pit Stop, deciding to visit Stripesey. Meanwhile, the student body mourns the death of Henry King Jr. who had been killed under ominous circumstances. The JSA are the only ones who know the truth behind his death, and are forced to endure the memorial in his honor and the empty speech that Henry King Sr. delivers to the student body. Courtney had been willing to give up her alter ego of Stargirl, even having told her friends at lunch that she planned to leave Blue Valley with her mother. This changes during the memorial services when she and the JSA hear the telepathic threats from Brainwave.[8]

The Injustice Society of America's plan to enact Project New America takes effect as they release satellites that broadcasts Brainwave's telepathic power across the country to alter the minds of every adult. The football field at BVHS opens up as two large satellite towers emerge as they emit the frequencies across Blue Valley. The teachers are left in a trance while the students watch in confusion. Stargirl flies above the field and uses the Cosmic Staff to destroy the satellites, exposing her existence to the students and faculty. The next day, after defeating the ISA, the team gathers at BVHS to say goodbye to Justin who is leaving Blue Valley to find his old teammates.[9] 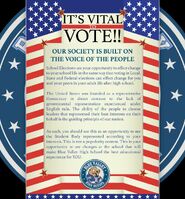 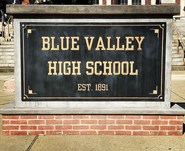 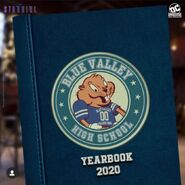 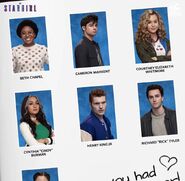 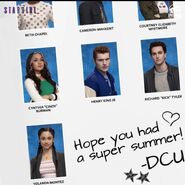 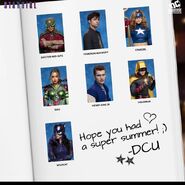