Stargirl Wiki
Register
Don't have an account?
Sign In
Advertisement
in: Characters, Season 1, Member of the Injustice Unlimited, Villains
English

Artemis Crock is a character in The CW and DC Universe series, Stargirl.

Artemis Crock was born in 2005 to Larry Crock and Paula Brooks in Blue Valley, Nebraska. She was trained to be an intense athlete due to her parents' obsession with fitness. This made Artemis a talented football player, and once she attended Blue Valley High School, she became the only girl on the football team. She is popular amongst most of the athletes.

An enthusiastic Artemis sits with her fellow BVHS football team members in the cafeteria, and eagerly converses with them whilst standing.[1] At an assembly, Artemis sits with her parents. Principal Bowin speaks on BVHS' athletic department, earning a booming reaction from Larry and Artemis. While mingling, Artemis stands with her parents and is heavily praised by them for her athleticism. One of her parents note that she is going to be the first female drafted into the NFL.[2] In the days that follow, Artemis continues to socialize with her fellow football team players, ignoring her other students.[3]

While searching for recruits for the JSA, Yolanda suggests Artemis Crock, who is dressed in a green archer costume. Yolanda thinks Artemis would be a good fit since she is the best athlete in the school. Courtney admits that she thought about Artemis, but thinks that she's a little too competitive. Just then, Artemis viciously tackles one of the boys and begins to cheer alongside the football team about her tackle. Yolanda then agrees with Courtney and they move on.[4]

At football practice, Artemis masterfully avoids tackles and plays from her opponents. She scores a touchdown only to be slammed into a tackle by Brian Tanner Balloid. She is on her feet quickly and angrily points out that the late tackle is against the rules. He admits to having tackled her late on purpose. He remarks that if she doesn't like it then she shouldn't be on the team. She retorts if it's because she's a girl, but he claims it's just because she's a terrible player. As he's turning to leave she punches him across the face. This results in the coach benching her the rest of the practice. She tries to argue that the tackle was late which the coach admits to, but he then comments that her attack was later than the tackle. She angrily storms off the field.

The following day after school, Artemis is sitting on the couch at home while her parents lie about having a date night and won't be home for the night. Artemis remarks that they never have a date night, but doesn't press the issue. She seems uncomfortable. Paula and Larry remind Artemis about doing a long list of exercises and her homework, noting that they would probably be back before midnight.[5]

On the last day of school, Artemis vents to her athletic friends about her parents arrest. She believes the arrest is some bogus robbery charges from back in the day and is a total frame job. She notices Courtney staring at her from the lunch table and returns the stern glare. She twirls her hockey stick and swishes it through the air in Courtney's direction. Courtney grabs the hockey stick and flips Artemis onto her back, angrily asking what her problem is. Artemis is on her feet in a split second and snatches the stick back, as she was merely returning it to her friend. She rudely calls Courtney a blonde pinhead and storms off with her friends.[6]

Artemis visits her parents in their respective maximum security prisons. She complains about the foster home she was placed in as they serve Mac n' Cheese and don't have television football packages. She emotionally relays how much she misses them and wishes they could come home, placing her hand on the glass separating them. Larry and Paula both repeat their love for their daughter and ask her to give the other parent their love. Their visit is cut short by a rude guard, who mocks Artemis' parents for serving long sentences. Artemis is driven to school the next day by her foster mother, who loudly talks on the phone about how she isn't being compensated for six children and only five. Artemis complains about the lunch she's been packed, as there's no protein or fuel for her football tryouts. The woman doesn't care and threatens to cut-off the collect calls from the prison if Artemis keeps complaining. She stays quiet as she leaves the car, but angrily throws a football across the field at an unusually high strength and speed as she broods.

During breakfast at BVHS, Artemis scoffs as the lack of healthy options and interrogates the lunch lady for not having healthier alternatives. The lady flatly states that Artemis should have brought food from home then. From behind Artemis, Courtney Whitmore extends an apple as a gesture of good faith. Artemis questions what the apple is for, and Courtney admits that it's her apology for the misunderstanding with the hockey stick. Artemis glares at Yolanda and snaps at her for staring, reminding her that it wasn't long ago that Yolanda was the outcast. Yolanda brushes her staring off as also being surprised at the lack of healthy food. Courtney sympathetically brings up Artemis's parents being incarcerated, but Artemis becomes angry as she believes her parents are innocent. She crushes the apple in front of Courtney and storms out of the cafeteria, leaving Courtney and Yolanda unnerved.

That afternoon, she attends tryouts in front of a college recruiter. She underperforms which leads to frustration on everyone's part. She hears loud cheering from the stands and looks over, breaking into a smile when she sees her parents sitting the bleachers with Pat Dugan. She begins to perform better until, unbeknownst to her, Cindy Burman uses Eclipso on Artemis to make her hallucinate her greatest fear. Artemis begins to see S.W.A.T. agents surround her parents with the order to kill being delivered. Artemis screams for them to stop and charges at the agents. She throws the drink cooler at one, not knowing that it's actually Brian Tanner Balloid, before flinging herself onto another. She begins to assault the agent as she screams her parents innocence. She is pried off the agent by two members of the football team, only then seeing the person she tackled is Courtney Whitmore.

With tryouts over, Artemis speaks with her parents where they admit they aren't innocent of their charges and deserve the punishment they're serving. They share their love and the truth about their pasts before sharing a large, emotional group hug. Her parents then leave the field to break back into prison. Now angry and emotional, Artemis retreats to the locker room where she is told by the college recruiter that her temper poses too much of a risk for their program. She hangs up the phone on him and stares at a photograph of her family that's pinned to her locker. Cindy approaches her to apologize for her family, but offers her the opportunity to be a member of a whole new team - one that her parents were part of too.[7]

Artemis is sent with Isaac by Cindy to destroy S.T.R.I.P.E. Then she fight the JSA with her comrades. But after Stargirl destroys accidentally the Black Diamond, Eclipso is free. He kills Isaac and sends Cindy in the Shadowlands, Artemis escapes in time. Later, she retrieves her parents released from prison by Cindy to help the JSA to defeat Eclipso. Larry, Paula, and Artemis helped the heroes successfully defeat Eclipso. After the fight, Larry, Paula, and Artemis moved in nextdoor to the Whitmore-Dugan House.

Artemis is very competitive, driven and angry. She channels her anger into sports and athleticism, and isn't afraid to stand up for herself even if it means inflicting physical violence onto someone. Despite this, she is shown to deeply care for her parents and becomes emotional when they were imprisoned during a time when she needed them most.

In combat, Artemis is seen to have a dangerously reckless streak in the way she fights, employing explosive pucks at pointblank range not only close to her targets but also to herself as she engages them in melee.

Artemis is a young girl in her early teens, with a round face, brown eyes, and straight brown hair. She is incredibly fit due to the extensive workouts she does with her parents for both leisure and to keep her place on the football team. She has a lot of team spirit and wears BVHS merchandise frequently. When she isn't at school, Artemis has an extremely relaxed and casual sense of style; though she has been known to don military camouflage apparels from time to time. 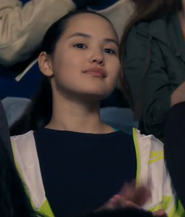 Artemis in the yearbook